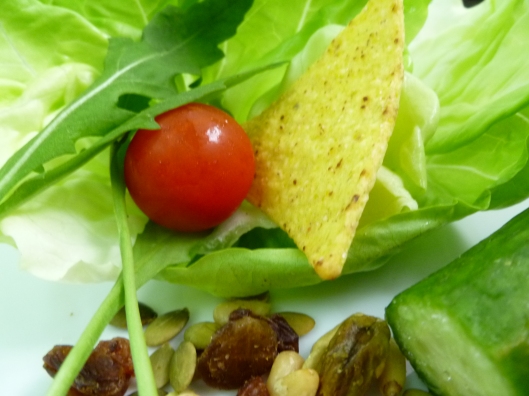 Depending on the combination of salad ingredients you use, this salad is either a meal in itself or a salad course.  With the chips, seeds, nuts and raisins it is an enjoyable lunch when you are really hungry.  For a salad course, fewer seeds, raisins and nuts–or none at all–and maybe a few sauteed strips of corn or flour tortilla to replace the chips–or not.  The vinaigrette is interesting enough to serve on a mixture of lettuces without any other additions.  In that case, a serrano chile garnish looks pretty.  The vinaigrette recipe will make about a cup, which is enough for 8 dinner guests, since it is not mixed with the lettuces, but dolloped on here and there over the individual salads before serving.  You can compose the salads on the plates ahead of time and finish with the vinaigrette just before serving.* 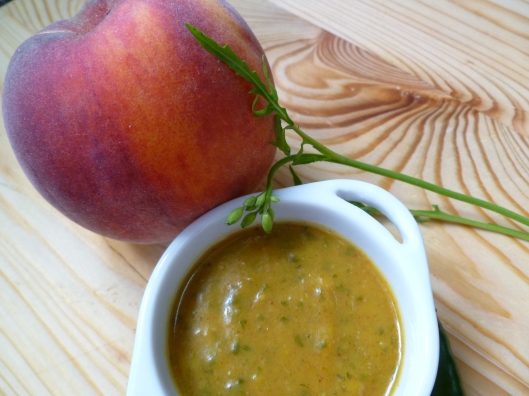 Peach and Cilantro Vinaigrette for Variation ~ I 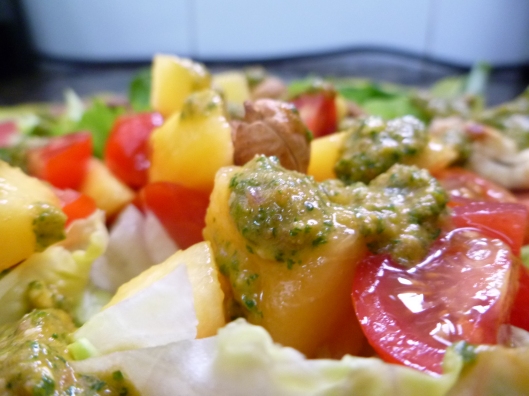 The peaches and tomatoes switch places in Variation II.  The peaches and lettuce are a delicate combination and so, make an especially good choice for a salad course.  The vinaigrette has a fresh taste and a slow burn that surprisingly enough, doesn’t overwhelm the fruit.  Leave out the cashews if you are serving this for a dinner party.  Without them, this is a salad course that won’t be too heavy, nor will people hurry through it, because the combination of flavours is pleasing and unexpected.  The serrano chile garnish works here too. 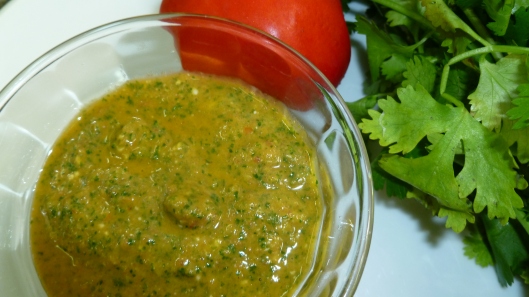 *I have made use of ideas suggested by other blogs (Eat. Drink. Smile and Steamy Kitchen), as well as a salad recipe from an issue of Gourmet Magazine from the early eighties.