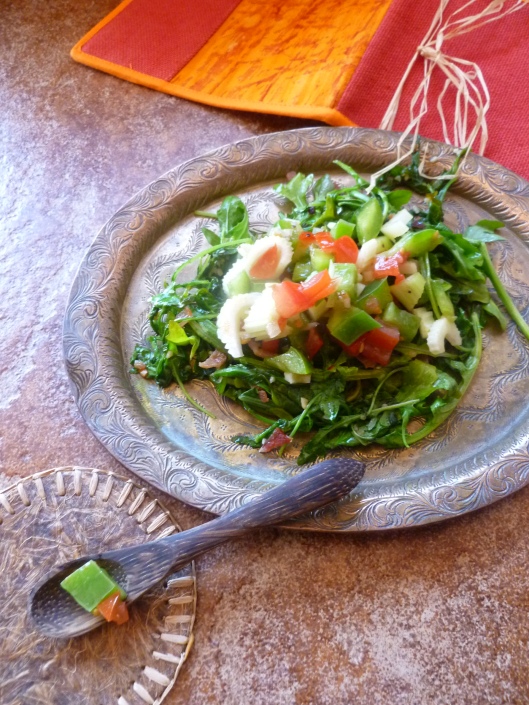 That survived until your generation.

The thing is, after you throw it away,

Nobody else can choose to keep it.

With our current culture’s love for the new and admiration for innovation, we often neglect the traditions handed down to us from those who came before.  Sometimes we look at them quizzically and say to ourselves, “Well that’s odd.  I wonder why they did it that way.  Maybe they didn’t know any better…”–the implication being that we do.

This is even true in the humble realm of the kitchen.  Many good things are lost to us when our focus is on the celebrity chef, the gimmicky or exotic ingredient, the glitz and tricks that are many (pricey) restaurants’ mistaken notions of real quality.

Here is a trio of recipes inherited from American cooks of yesteryear. Together they obligingly comprise a First Course (as in this July 4th Dinner Menu), a Vegetable Side Dish, or a Salad Course. The first, Greens and Bacon, is so deeply rooted in American home cooking of the past that, like a nursery rhyme or a folk song, it has no traceable lineage.  Garden Sass is a summertime preparation of things straight from the garden.  For this recipe we have Beth Tartan to thank.  She was, at one time, the food editor of the Winston-Salem Journal and in one of her books, The Good Old Days Cookbook (1971) this all-but-forgotten way of using the freshest vegetables in the garden is described.  And, to prepare Garden Sass, one needs a little French Dressing. The 1953 second printing of the first edition of the Better Homes and Gardens New Cookbook is the source for the dressing.  Many recipes for French dressing have succeeded but not surpassed this one as a complement to traditional American dishes.  Its balance of tart and sweet and spice is right.

Postscript:  Beth Tartan (her pen name) was an accomplished cook (a graduate of the French Cordon Bleu), a very readable writer and had an abiding interest in keeping alive the cooking of the American kitchen of the past.  In the forward to her North Carolina and Old Salem Cookery (published in 1955 under her real name, Elizabeth Hedgecock Sparks, and available in its entirety here in the online Hathi Digital Trust Library) she recounts an amusing story to illustrate how hard it is and why it is we keep trying to ‘make things the way grandmother did’:

“A North Carolina wife, after hearing her husband rave for years about his mother’s buckwheat cakes spent weeks trying different recipes.  Each time she served a new batch her husband would say, “They’re good but they don’t taste just like mother’s.”

“Finally, one morning after serving an especially good stack of buckwheat pancakes, the husband’s reply was the same.  Her response was, “If your mother came down from Heaven and made buckwheat cakes, you’d say, they don’t taste the way they used to.”

“As long as men remember their mother’s table,” writes the author, “There will be women who try to duplicate the old dishes.”  (I can vouch for it, for I have been following the illusive trail of the legendary fudge made by my husband’s grandmother lo these many years.)

“That,” Beth Tartan concludes…(and some of us will concur), “Is as it should be.”

Greens and Bacon with Garden Sass (for 4 people….one need only increase the amount of greens and bacon to increase the number of servings)

Timing Note:  The Garden Sass chills for 2 hours before it is used to make Greens and Bacon with Garden Sass.

Part I:  Greens and Bacon with Garden Sass

1.  Fry the slices of bacon (or lardons) in the pan until they are golden.  Drain them.  If using bacon, chop it up.  Set the chopped bacon or lardons aside.

2.  Add to the grease in the pan 1 Tablespoon of olive oil.  Heat the bacon fat and oil over medium heat and when it is hot, add the garlic and cracked red pepper and cook them, stirring, just until the garlic begins to brown around the edges.

3.  Add the greens and cook them, stirring, until they begin to wilt.

4.  Add the coarse salt and the Tablespoon of water and continue to cook, stirring, until the greens are just wilted.  Turn off the heat and stir in the bacon or lardons.

5.  Divide the warm greens among the plates and top each with a large spoonful of Garden Sass.  (The recipe for the Garden Sass is below in Part II.)

Part II:  The Garden Sass (for about 2 cups)

Note:  Garden Sass requires a little French Dressing….and the recipe for it is below in Part III.  ‘Sass’ not used for this recipe keeps well refrigerated for several days.

1.  Mix all the ingredients together in a bowl and chill for 2 hours.

Part III:  Homemade French Dressing (for a little over 1/2 cup)

Note:  Dressing not used for this recipe will keep well for many, many days in the refrigerator. 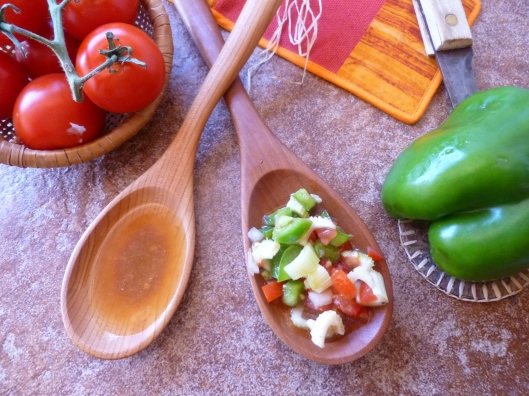 1.  Place all the ingredients in the jar.  Cover it and shake well.  If the dressing isn’t used right away, shake it up again right before adding it to the Garden Sass or to a salad.

A Note:  Greens and Bacon with Garden Sass is the First Course of the dinner:  A July 4th Dinner under the Desert Sky.  It could also be served as a Salad or as a Vegetable with a Main Course.

Acknowledgements:  The Garden Sass recipe is adapted from one in Beth Tartan’s The Good Old Days Cookbook (1971).  The French Dressing recipe is based on one in the second printing of the first edition of the Better Homes and Gardens New Cookbook (1953).