Likely you do not think of pumpkin seed eating as a topic for debate.  Even this boutique issue has its advocates, however, and their key concern is shelling.  There are…those who do…and those who don’t.

In the anti-shelling camp are those who stand on enlightened, scientific principle for the hull’s healing properties.  (Some eat the unshelled seed as a preventive medicine against anxiety attacks and depression.)  They are joined in alliance with those who view ‘not shelling’ in the light of an expression of freedom of choice.

Their opponents regard the hull as an infringement against the same right to choose.

And the traditionalists on both sides base their defense on the fact that they have always done it ‘that way’.

The tempest over the little hull, however, unlike many differences of opinion, is a congenial one– for fun.  Mark Twain once observed that: “It were not best that we should all think alike; it is difference of opinion that makes horse-races.”  The hull, good-naturedly, contributes its mite to keeping the races running. 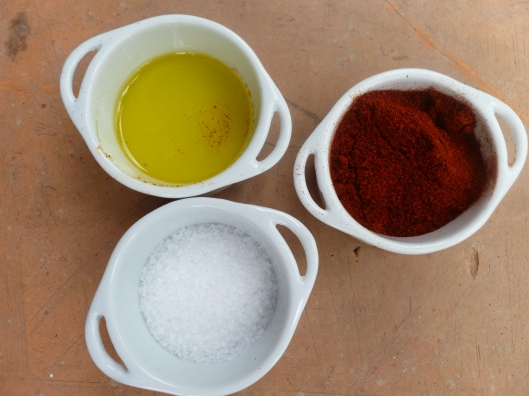 1.  Put the seeds in a dry skillet over medium heat.  Stir them around as they brown and roast.  They will be done in about 5 minutes, or a little less: 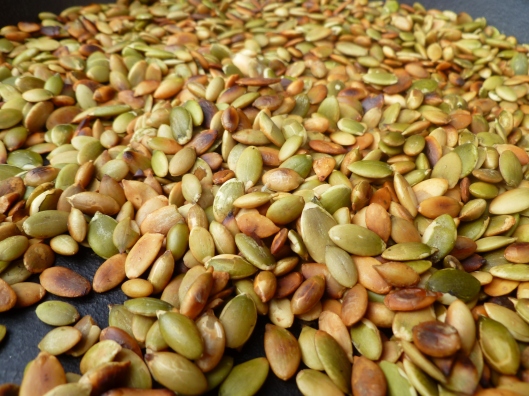 2.  Take the skillet of seeds off the heat and stir in the olive oil:

3.  Add the chili powder and salt: 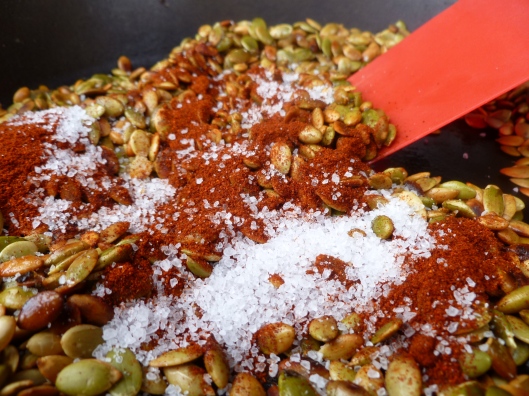 A Note:  Pumpkin Seeds ~ Chili-roasted are served with drinks before lunch in the  Menu:  Southwestern Elegance.  It is no trouble to serve them warm–by setting them aside in the pan in which they were roasted and spiced and reheating them for a minute right before putting them in a bowl.

Another Note:  The diplomatickitchen gratefully acknowledges suggestions for this recipe from the website Elanaspantry.