In some parts of the United States, small local factories supply grocery stores with their tortillas.  In this case, store-bought flour tortillas can be every bit as good as homemade ones.

But in other places, the only available tortillas apart from the ones you make in your own kitchen are waxy vacumn-packed discs that are distant relations of the real thing.

In the June 1980 issue of Gourmet, a reader by the name of Neal Vinson contributed his recipe for flour tortillas.  ‘Homemade’ suggests much time and labor, but Mr. Vinson’s tortillas require neither.  With the help of a food processor, the dough is ready in minutes.  After a little practice, rolling out and baking flour tortillas is equally unproblematic.  Making them is a relaxing enterprise.  And since the dough is not a difficult one to work with, children may enjoy making a few tortillas out of it, too.

Flour tortillas require some sort of fat in their composition.  Mr. Vinson used lard in the original recipe.  I have made them with butter, and also with Crisco shortening, and both are good. Lard is traditional and probably would be very fine, too.  Some recipes use canola oil, which produces  tortillas of a very different texture and taste.  Canola oil tortillas have an enthusiastic following.  It’s a question of individual preference.

Fresh Flour Tortillas (8 – 10 tortillas, depending on their size) 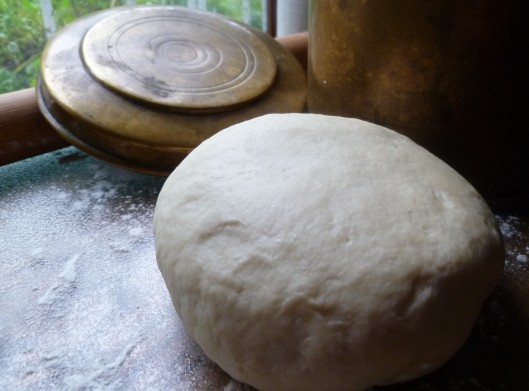 2.  When the mixture becomes fine and is well-combined, slowly add 2/3 cup of warm water by pouring it through the tube while the processor is still on.

3.  Continue to mix in the processor until the dough pulls away from the sides and forms a ball.

4.  Turn the dough out on a pastry board sprinkled with a little flour and knead it into a ball.  The dough is not very sticky and is easy to handle:

6.  Cut the log into 8 or 10 pieces of roughly equal size.  (If the tortillas are being made for a Soup or Salad course, divide the dough into as many pieces as there are guests at the table.  For a course, one tortilla for each person is enough. The tortillas in the photos are about 45 grams each, for a Soup course in a dinner for 10 people.  For extra tortillas, the recipe doubles easily.)

7.  Roll the pieces into balls:

8.  Heat the stove-top grill (flat, griddle-side up) over Medium heat while you roll out the balls.  Roll each ball out into a circle–the diameter depends on the size of the balls.  The ones in the photo are between 6 and 7 inches wide.  When it becomes difficult to roll the round out any larger without losing the circular shape, the round is large enough.  Each tortilla is stretched by hand to make it thinner right before baking: 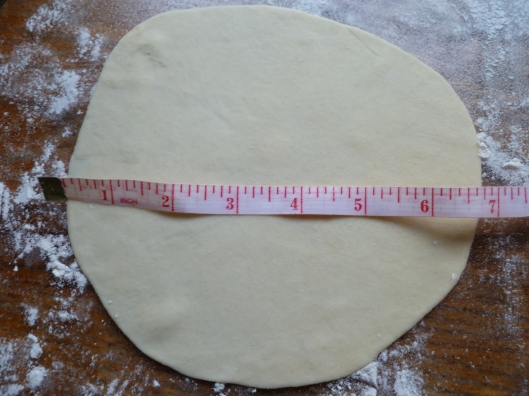 9.  Roll out and place all the tortillas on a cotton towel before beginning to bake them: 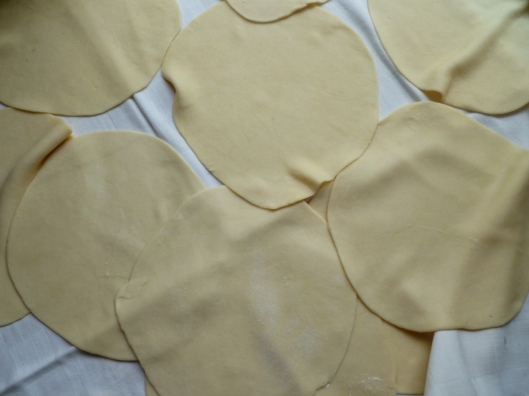 10. The griddle should be very hot.  Leave the burner temperature at Medium heat while you make the tortillas.  Rub a little vegetable oil on the griddle once, before you begin, with a brush or paper towel–only once or even not at all. Take up a tortilla in both hands and stretch it out gently in all directions with your fingers.  Place it on the griddle.  In about thirty seconds, bubbles will appear on the surface of the tortilla:

11. Once the bubbles appear–flip the round over.  As tortillas bake, they whiten and lose their yellowish tinge.  Press down on the tortilla with a spatula, especially on any uncooked spots, to hasten the baking.  The tortilla will appear to inflate a bit.  Turn it once more and look for raw-looking edges or spots.  If there are any, press them out briefly and transfer the tortilla to a cotton towel.  The finished tortillas should still be flexible and soft. Cover them lightly in the towel to keep them warm and prevent them from drying out, or becoming damp from the trapped heat: 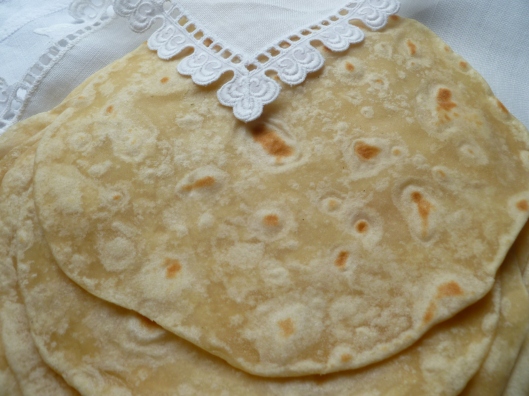 A Note:  Fresh flour tortillas may be made in advance and set aside at room temperature.  About a half-hour before serving, place them, still wrapped in the cloth, on a baking pan. Wrap the whole in aluminum foil and reheat slowly in a 275 F. oven.  Fresh Flour Tortillas  are served with the Soup course in the Lunch Menu:  Southwestern Elegance. 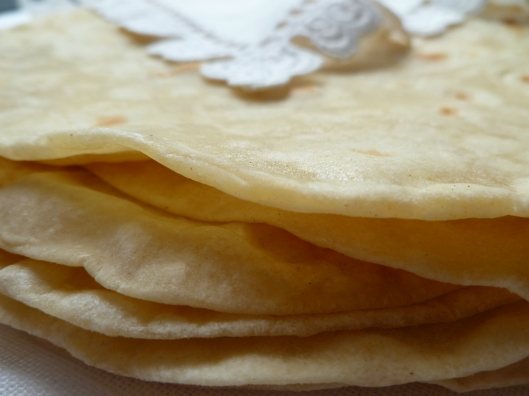