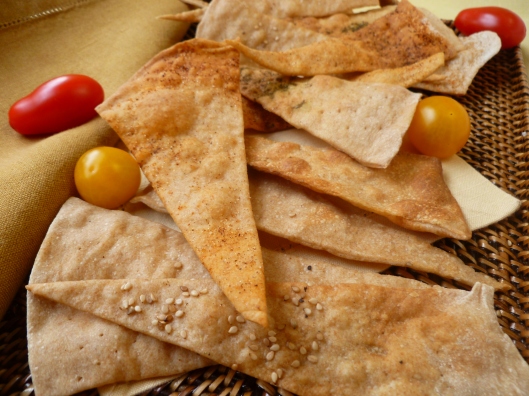 Harmony is a happy state.  It has all sorts of good side effects, not the least of which is a sense of peace and well-being.  It manifests itself in high realms and low.  A Bach fugue combines four individual ‘voices’ into a beautiful whole and…there’s harmony.  Marriage, as Anglican clergyman Sydney Smith once described it in a clever metaphor, is all about harmony:  “[It] resembles a pair of shears, so joined that they cannot be separated; often moving in opposite directions, yet always punishing anyone who comes between them.”  (Mr. Smith’s marriage in 1800 was a love match and the union has been described as ‘a singularly happy one’.)

It is a long way down from the high country of Bach and the ideal of marriage to thoughts on cheese and crackers.  Still, there’s harmony in the way certain edibles seem suited to each other, and the evidence of it is as sensible as it is in higher objects.  In the case of crackers with cheese, as with many other traditional combinations,….it’s in the taste. 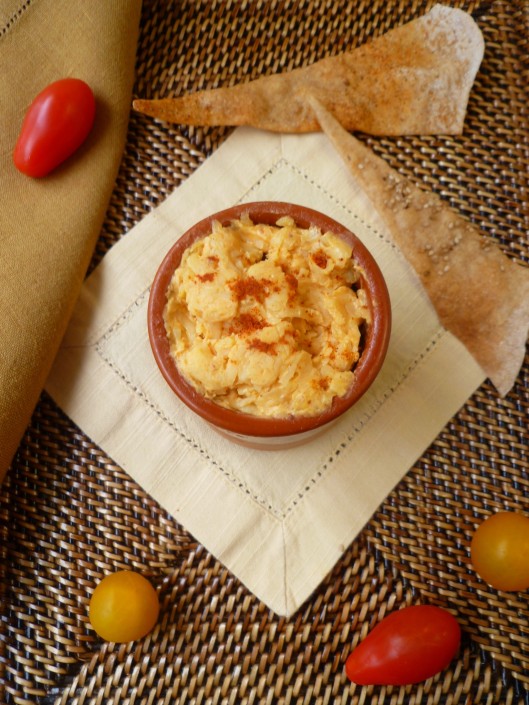 Homemade Wholewheat Crackers with Assorted Herbs and Spices (for 48 sizeable cracker triangles, or 64 slightly smaller ones:  each rolled-out disc of dough is cut into 12 (or up to 16) triangular crackers; and each disc may be sprinkled with a different herb or spice mixture.  A few flavouring mixtures are suggested below.)

A Timing Note:  After mixing the cracker dough, it is left to rise for about 2 hours. 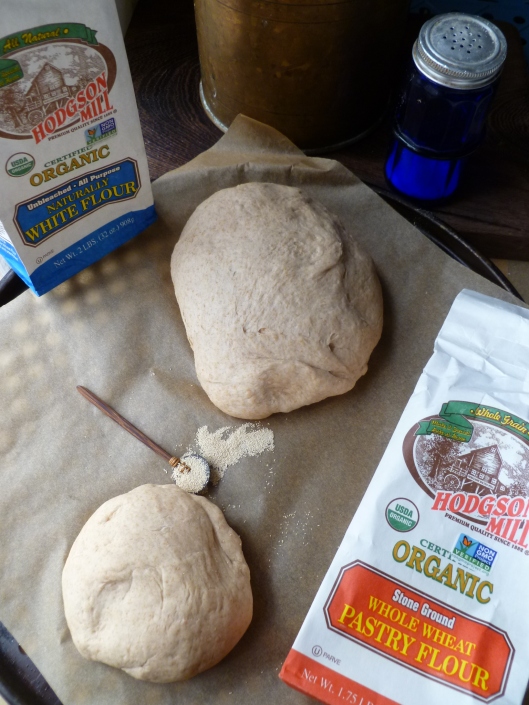 Ingredients:  The recipe is given in metric measurements, with the closest equivalent American measures in parentheses.  (For American measures of flour, pour the flour into the measuring cup and level it off.)

1.  In one of the mixing bowls (the bowl of the mixer, if you’re not mixing the dough by hand), combine the wholewheat and white flours, the yeast, salt and cumin.

2.  Fit the mixer with the Paddle attachment, turn it on, and slowly add the water to the dry ingredients, mixing until a dough forms and leaves the sides of the bowl clean.

3.  Turn the dough out on a pastry board.  (The dough isn’t a sticky one and there’s probably no need to sprinkle the board with flour.)  Knead it for a few seconds just to test by feel that the dough is well combined and form it into a ball.  Turn the mixing bowl upside down over the dough and let the dough rest for 15 minutes.

4.  While the dough rests, grease the second mixing bowl with olive oil.  At the end of 15 minutes, knead the dough again for a minute before placing it in the greased bowl.  Cover the bowl with plastic wrap and let the dough rise for 1 hour.

5.  At the end of an hour, remove the dough from the bowl, place it on the pastry board and pat it out into a circle of about 7-inches in diameter: 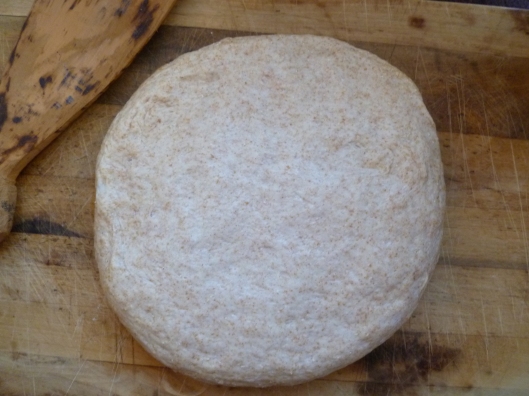 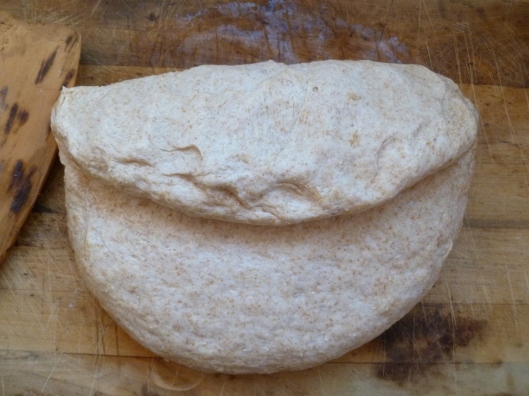 …then fold the bottom third of the circle up over the top third: 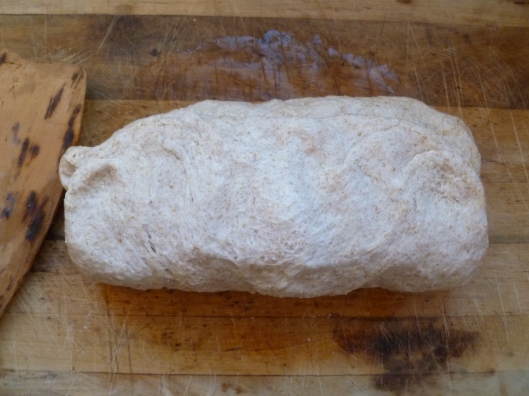 7.  Fold the left third of dough into the center… 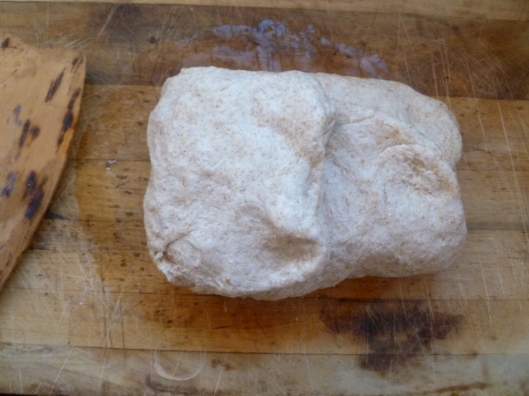 …and then fold the right third over top of the left third.  The circle has now become a square: 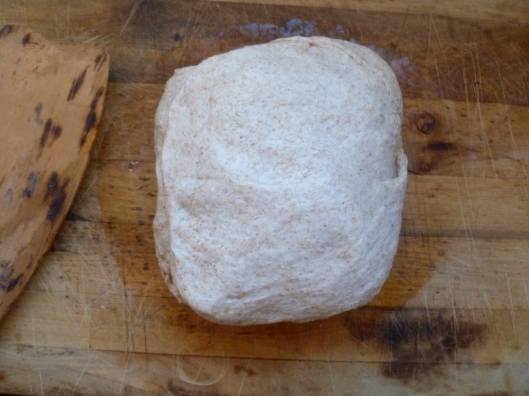 8.  Put the dough back in the bowl, smooth side up, and let it rise for another hour. 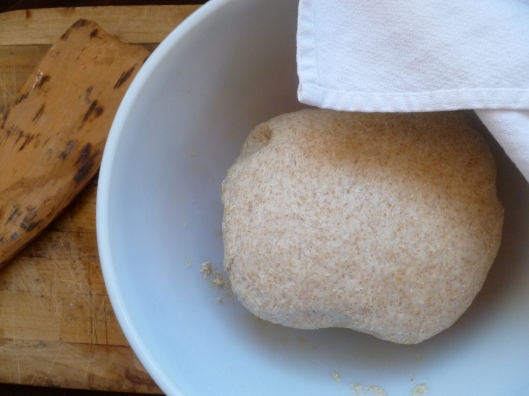 8.  Preheat the oven to 230 C (450 F).  Divide the dough into two equal halves and divide each half again into two equal pieces.  Roll each of the 4 pieces into a ball and cover them lightly with a cotton towel to prevent them from drying out. 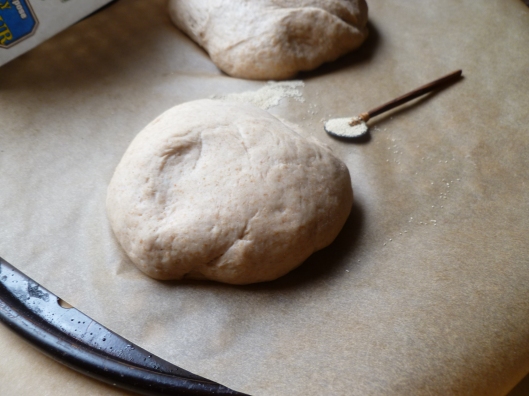 9.  Roll out one ball into a thin circle…about 13 inches in diameter.  (The dough is neither dry nor sticky.  The pastry board needn’t be floured.)  Flip the round over from time to time as you roll it out–this makes it easier to roll it thinly.  Then place the circle on a parchment-lined pizza pan or baking sheet. 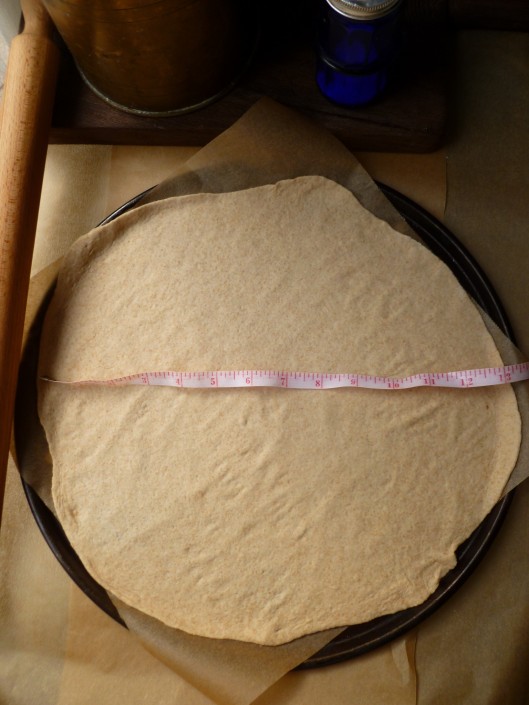 10.  Brush the circle all over with some olive oil (about 1 teaspoon for a round is enough)… 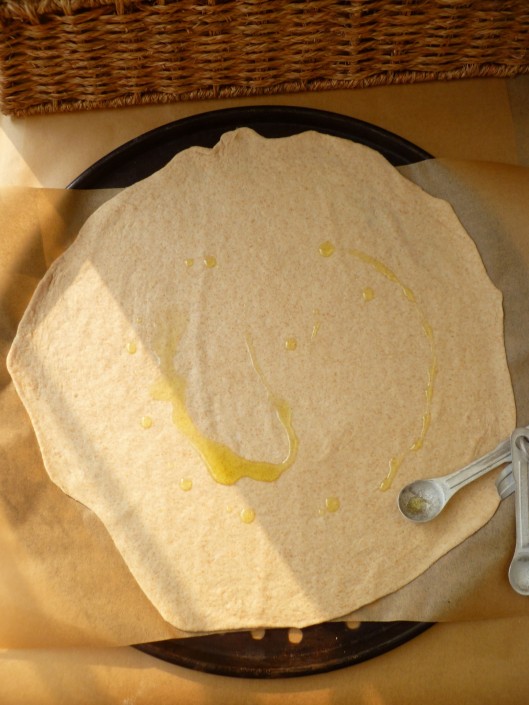 …Prick it all over with a fork and sprinkle the circle with one of the suggested toppings or one of your own devising.  There are all sorts of possibilities.  You might sprinkle on Za’atar… 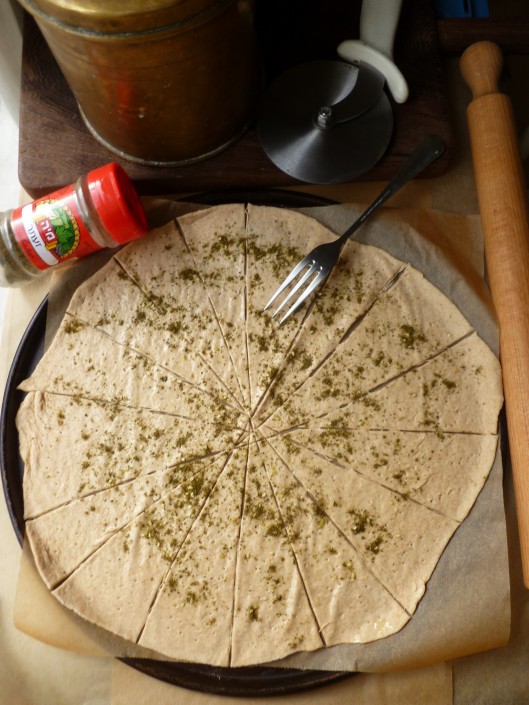 …You may want to turn one round into a sweet cracker to accompany an ice cream or pudding dessert by sprinkling the oiled dough with a mixture of 1 teaspoon of Quatre Epices mixed with 1/8 cup of granulated white sugar or a mixture of cinnamon and sugar: 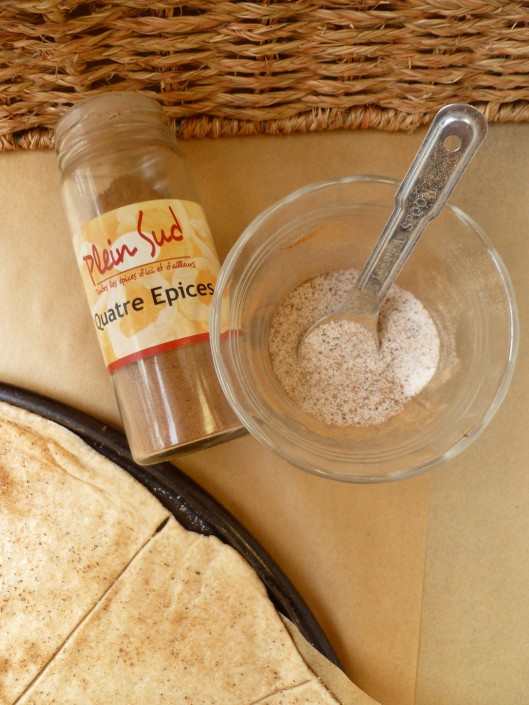 11.  Cut the round into 12, or up to 16 triangles and bake it in the preheated oven (230C/450F) for 4 minutes.  Slide the paper out from under the crackers and continue baking them directly on the pan or baking sheet for 3 minutes more, or up to 8 minutes longer, to crisp them. The total baking time depends on the crackers’ thickness.  All told, the total baking time may be up to 12 minutes.   (If there are a few softer spots on crackers that are otherwise crisp and golden, take them out of the oven.  They will continue to crisp a little as they cool.)  Transfer the crackers to a rack to cool and make crackers from the remaining 3 rounds of dough in the same way, flavouring them with whatever combination of herbs and spices you like.

12.  The crackers will keep for a long time stored in a tin. 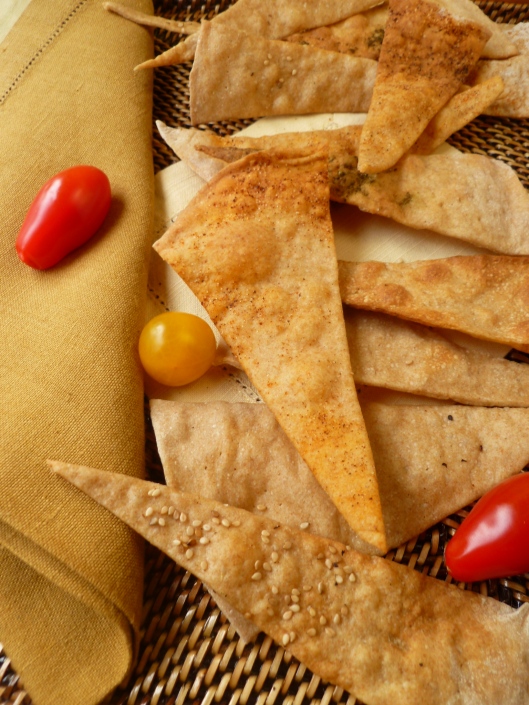 A Note and an Acknowledgement:  Homemade Wholewheat Crackers are included with the Hors d’oeuvres in the Lunch Menu:  A Cold Winter’s Day Luncheon Menu Reminiscent of Sunny Climes.  They combine harmoniously with the Muhammarah (Spicy Roasted Red Pepper and Walnut Spread) that is also included as an hors d’oeuvre in the Menu.  The  recipe is an adaptation of one by Anissa Helou, who writes about and cooks Mediterranean food.  Here is a link to the blog on her website. 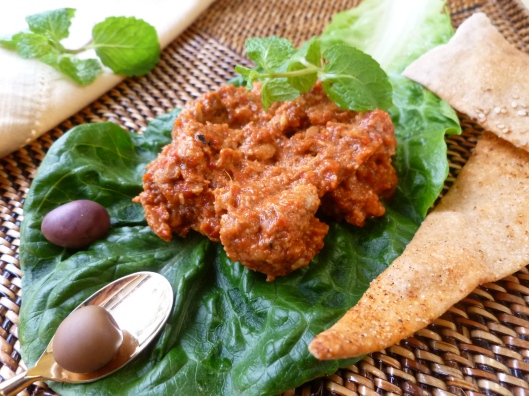 2 thoughts on “Homemade Wholewheat Crackers with Assorted Herbs and Spices”