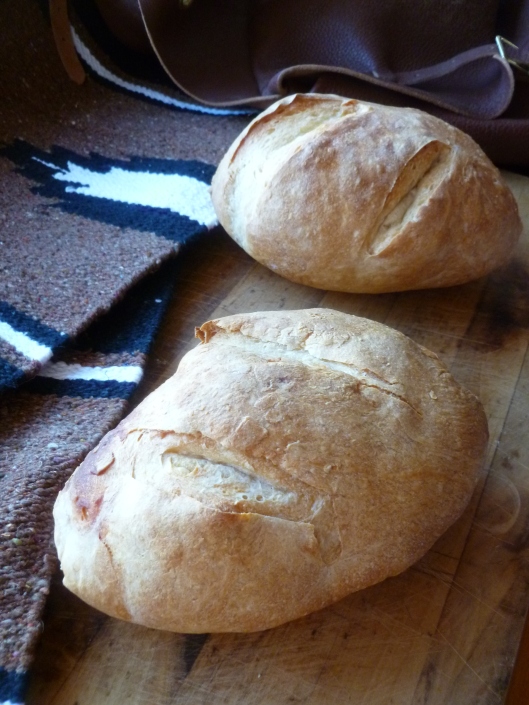 Many ex-pat cooks become adept at making what they have been accustomed  to buying ‘back home’.   Jams, jellies, peanut butter, pancake syrup, tortillas, English muffins, pasta and, of course, ice cream come to mind as representative of what the cook outside her native element learns to produce in her own kitchen rather than go without.

The current dk Menu ( Blunting the Keen Tooth of Winter:  A Supper Party following an Out-of-Doors Afternoon) includes an Onion Soup that requires a good sturdy bread that will not disintegrate on contact with liquid.  Anyone living in the vicinity of a bakery offering ‘country style’ bread or ‘pain de campagne’ will have no problem procuring the right sort of loaf.  But if your kitchen is not so conveniently located in this respect, this recipe is offered as a way to provide yourself with what you cannot buy so that you do not have to forgo making what you will.

And sometimes…even if you can buy it, it is more fun to do it yourself.

A Timing Note:  The starter for these loaves is made a day ahead and left overnight at room temperature.  Mixing, time for the dough to rise and baking  will take approximately 4 hours.  In this case, long hours do not mean difficult to make.  If you would like an especially crisp crust, add some extra time to this estimate:  turn off the oven, crack the door, and leave the loaves to cool in the oven.

A Measuring Note:  The amounts of the ingredients are given in American measurements and, in parentheses, metric ones.  To measure the flour using American measures, pour the flour into the cup and level it off.

Ingredients for the Starter:

Ingredients for the Loaves:

I.  Making the Starter (The starter sits at room temperature overnight.)

1.  In a small bowl combine the water, flour and yeast.  Stir them together.  Cover the bowl with plastic wrap or a towel and set it aside at room temperature overnight.

1.  In a mixing bowl, combine the starter, the water, flour, yeast and salt.

2.  Stir with a spoon to mix the dough or use an electric mixer fitted with a paddle attachment.  When the mixture forms a dough which comes away from the sides of the bowl, but is still sticky.  Let the dough rest in the bowl for 20 minutes, covered, then turn it out onto a lightly floured pastry board…

3.  Place the dough in a very lightly greased bowl, cover it with plastic wrap or a towel and let it rise for about 1 and 1/2 hours or until it doubles in size.

4.  When the dough is risen, transfer it to a pastry board and divide it into 2 equal parts.  Cover the dough and let it rest for another 20 minutes before forming it into “bâtards” (small, oval-shaped loaves, slightly pointed at each end).

5.  To form a ‘bâtard‘, press one half of the dough out into a rough, long-ish oval shape, about 10 inches across: 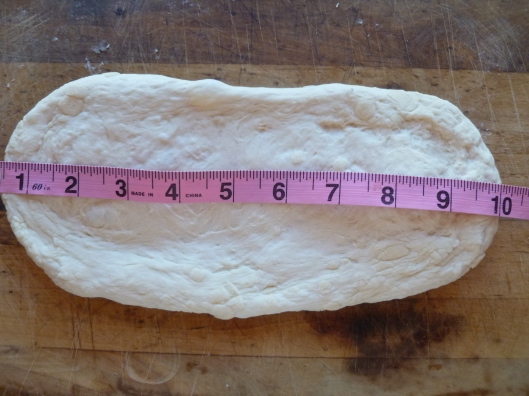 6.  Imagine the dough divided (left to right) into 3 parts.  Fold the right third of the dough over the middle third, making a vertical crease down the center of the dough, and seal the crease line:

…then bring the bottom right hand corner up to meet it (as though you were folding a napkin or handkerchief) and seal all the edges:

…Now lift the left-hand portion of dough where it meets the top of the vertical crease down the dough’s center and bring it up to meet its mate.  Seal all the edges: 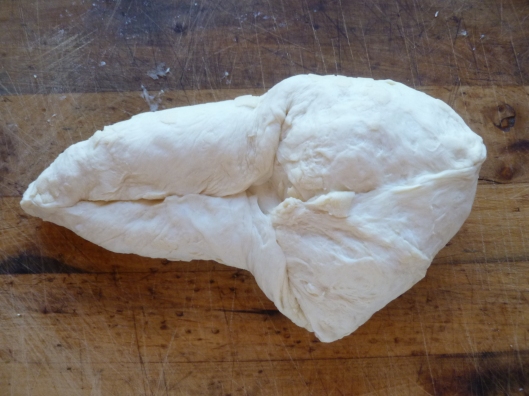 …The  pointed tips of the ‘bâtard‘ form as you roll the dough, right-to-left:

10.  Give the loaf a quarter turn so that the pointed ends are to your right and left, and pinch the edges together to seal them:

…Transfer it to a parchment-lined baking sheet and form the second loaf in the same way.  Let the loaves rise, covered loosely with a cotton dishtowel, for about 2 hours…

…Once risen, they will resemble fat little footballs: 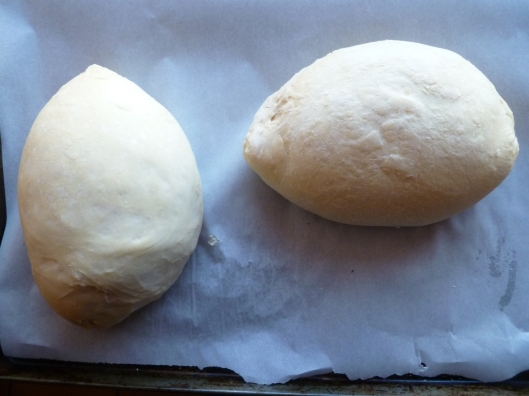 13.  Near the end of the rising time, preheat the oven to 425 F (218 C).  Make a couple of diagonal slashes in each loaf and, with your fingers, smooth some water over the surface of each one. 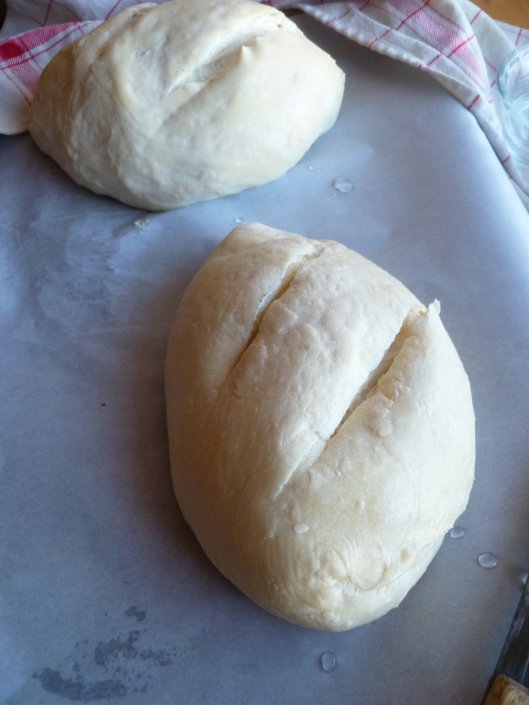 14.  Bake the loaves for 30 – 35 minutes, or until they are golden.  For an extra crisp crust, turn off the oven at the end of the baking time, crack the oven door, and let the loaves cool in the oven.

15.  This bread is very good eaten fresh.  It remains good for several weeks to use in any recipe requiring a bread of sturdy texture if it is stored in the refrigerator.

A Note:  Slices from these Rustic Loaves are used to make Red Wine Onion Soup Gratiné in the dk’s Occasional Menu:  Blunting the Keen Tooth of Winter:  A Supper Party following an Out-of-Doors Afternoon.  The recipe for the soup will appear in the dk’s next post.  This bread recipe is based on one by King Arthur Flour for European-Style Hearth Bread.