Sheila Hibben, the New Yorker magazine’s first food columnist, authored several books on cookery.  Among them is a slim and delightful little volume called A Kitchen Manual, available to read online here in the Hathi Trust Digital Library.  As Mrs. Hibben states in her characteristically emphatic style, the book is not a collection of recipes.  “My intention,” she says, “Was to write a new kind of mystery story, a book of secrets, a homily on the hang of the thing.”  She proceeds to write a series of brief and entertaining chapters on the fundamentals of good cooking, from ‘Soup Making’ to ‘Sauces in Particular, and Seasonings in General’.

In hopes that it will prove edifying not only to cooks, but those who appreciate a well-turned sentence, here is an exerpt from A Kitchen Manual on cooking onions…It is, as well, an appropriate preface to a recipe for Zwiebeltorte ~ Onion Torte:

“On the subject of the onion alone a whole chapter might profitably be written, so important it is that the immortal bulb be treated with the consideration and respect it merits.  Wherever a prejudice against the onion exists it usually can be traced to conditioning at the hands of careless cooks…The danger of overdoing the onion taste lies not half so much in the quantity employed as in the use made of it.  Only long slow frying or braising can bring out the rich savor of the vegetable as it should appear in a ragout, a hash or a baked meat.  The mistaken use of an adverb in recipes which direct the cook to ‘fry onion lightly’…means (or should mean) that the frying be done to a light color, slowly and carefully, not that the process be shortened.  The resulting misunderstanding is responsible for stews in which the unpleasant emphasis of half-cooked onion takes the place of a suave unidentified flavor which might have added so much to the dish…This extreme care in the preparation of the onion ingredient is not suggested in any shamefaced effort to disguise the flavor, but in order to bring out its magnificent possibilities.” 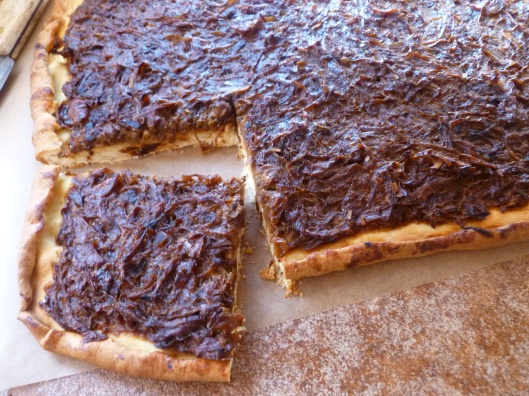 Zwiebeltorte ~ Onion Torte (for a 12-inch by 16-inche torte)

Timing Note:  The yeast dough for this recipe is not fragile.  It may be mixed together, covered and refrigerated for 2 – 3 days prior to making and baking the torte.  The onion filling may also be made and refrigerated for several days.  The torte is best served hot and straight from the oven.  It does not reheat well, and it is a decidedly lesser version of itself at room temperature.

I.  Making the Dough:

1.  Pour the lukewarm milk in the mixing bowl.  Sprinkle the yeast over it and add 1 teaspoon of the sugar.  Set the bowl aside until the yeast is dissolved and the mixture is foamy.

2.  Add the shortening, 1 of the eggs, the salt and 1 cup of the flour and blend everything well together by hand.  Add the remaining 3 cups of flour, 1 cup at a time, stirring with a wooden spoon or mixing by hand.

3.  Turn the dough out onto a floured pastry board and knead it until it is smooth and no longer sticky.

4.  Rinse, dry and grease the mixing bowl.  Place the dough in it.  Cover the bowl with plastic wrap and let it rise until it doubles in bulk.  (The dough may be left to rise in the refrigerator for up to 3 days.  It does not need to be brought to room temperature before rolling it out.)

1.  Melt the butter in the pan over medium heat.  Add the sliced onions and sprinkle the remaining 2 teaspoons over them.  Adjust the heat to low and cook the onions very slowly, stirring them from time to time, until they are golden.  Add sloshes of the 1/3 cup of wine whenever you stir the frying onions.

2.  When the onions are golden and all the wine has been added and absorbed, stir in the thyme leaves and transfer the onions to a mixing bowl to cool.  (The cooled onions may be stored in the refrigerator for 2 – 3 days prior to making the torte.)

3.  Just before rolling out the dough and assembling the torte, beat together in a small mixing bowl the 2 remaining eggs, the sour cream, caraway seeds and coarse ground pepper to taste.  Stir the mixture into the onions.  Set it aside and roll out the pastry.

III.  Forming and Baking the Zwiebeltorte

2.  On a floured pastry board, roll the dough out into a 12-inch by 16-inch rectangle.  Transfer it to the baking sheet and fold up the sides of the dough to form a 1-inch border.  Crimp the border to make it look nice and spread the onion mixture evenly over the dough:

4.  Cut it into squares and serve it hot, straight from the oven, garnished, if you like, with sprigs of fresh thyme. 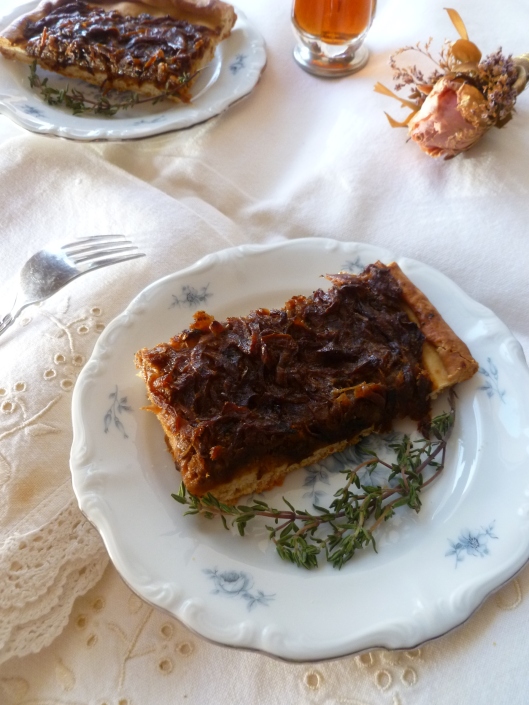 A Note:  Zwiebeltorte is served with drinks before lunch as an hors d’oeuvre in the diplomatickitchen Menu:  Easter Lunch.  It would go very well with a soup for a Light Main Course for lunch, too.  The recipe is adapted from one that appeared in James Villa’s The Town and Country Cookbook (1985).