(from Tammy Wynette’s song ‘Stand By Your Man’…hear her sing it here on YouTube.)

The diplomat’s wife has unique opportunities for standing by her man.  Quite literally, she may do it in countless receiving lines at receptions.  But, more to the point, she does it as she unpacks and sets up house, again and again, in all the disparate parts of the world where her husband is posted.  Then, after several years, she dismantles the home and starts all over again in some new, sometimes bizarre, location.  Infrequently, but not as infrequently as one might expect or hope, she is called upon to stand by him by leaving him.  And this is the hardest form of standing…when, for whatever reason, the country in which the diplomat and his family are living becomes (sometimes quite suddenly and unexpectedly) dangerous and the diplomat’s wife must shepherd their children out of the country…leaving her husband behind to do his job, not knowing exactly when they will be reunited.

Ranjana Sharma, whose husband is in the Indian diplomatic service, is the face behind this recipe for Alu Paratha: 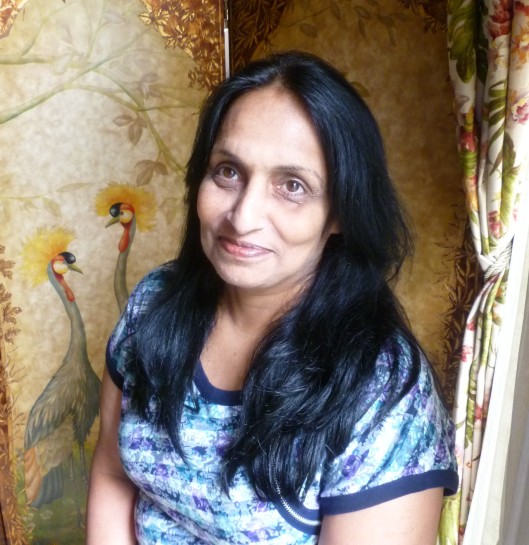 They say a picture’s worth a thousand words…and so, to conclude these brief musings on the diplomat’s wife, here are a few faces… of women from all over the world for whom life in the foreign service has offered uncommon ways in which to ‘show the world’ she loves her man.  (Left to right by country or organisation:  Taiwan, Belgium, Morocco, Canada, Japan, United States, Algeria, European Union):

A Menu Note:  Ranjana’s Alu Paratha are served as an hors d’oeuvre in the Lunch Menu:  A Lunch with Spice and Many Things Nice.  Because Potato Croquettes accompany the Main Course, the diplomatickitchen suggests making the Paratha according to the recipe, but leaving out the potato filling for this Menu.  Plain Paratha are folded and fried in the same way as Alu Paratha.

Ingredients for the Potato Filling:

Ingredients for the Bread (aka Chapati):

Ingredients for the Yogurt Dipping Sauce:

I.  Making the Potato Filling:

1.  Boil the potato until tender.  Drain and transfer them to a mixing bowl.

2.  Add the onion, cilantro and ginger to the potatoes, as well as the garlic and green chilis, if including them.

3.  Mash the mixture to a coarse texture with a potato masher or large fork:

4.  Set the filling aside to cool while you make the paratha.

1.  Place the flour and salt in the bowl of a mixer fitted with the paddle attachment.  Turn on the mixer and slowly add water.  When the dough forms but is still a little flaky or “scrappy-looking”, add a tiny bit more water and continue kneading the dough with the paddle attachment until the dough balls onto the paddle and leaves the sides of the bowl clean.  (If mixing the dough by hand, slowly add water to the flour as you mix and knead it in the bowl with one hand until the dough is pliable and cleanly leaves the sides of the bowl.): 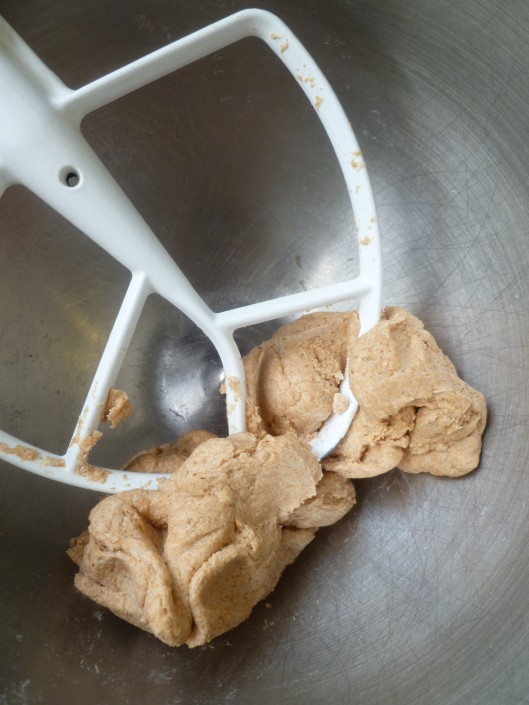 2.  Divide the dough into 8 (roughly) equal pieces and roll the pieces into balls:

2.  Flour a ball of dough.  Cover the rest of the balls with a damp cotton dishtowel: 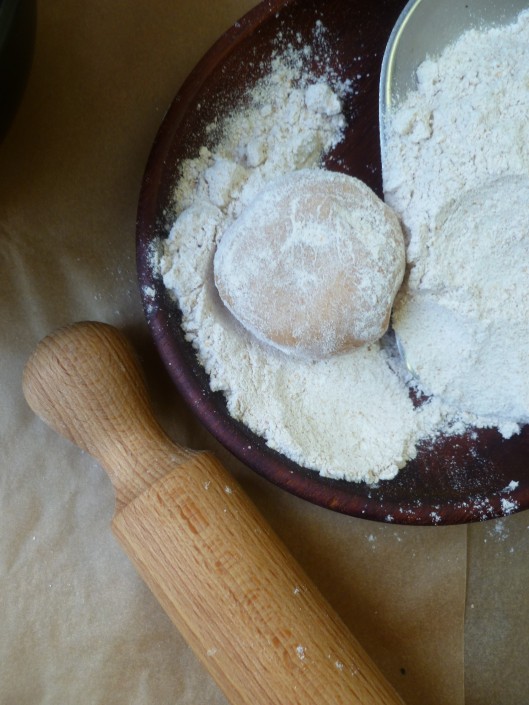 3.  Roll the floured ball out into a thin circle of about 8 inches in diameter: 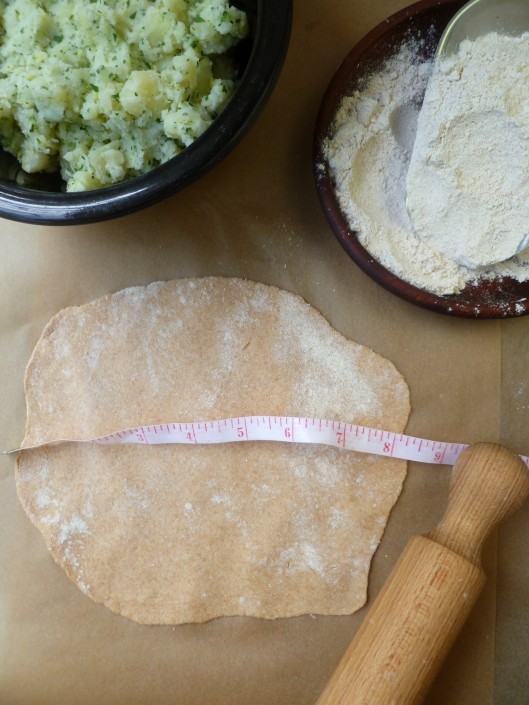 4.  Place 1/4 cup of the potato filling in the middle of the round and fold the left and right sides of the round in towards the center to cover the filling:

5.  Pinch the edges together where they meet down the center, over the filling:

6. Then bring the sides of the dough up in folded pleats to meet in the center… 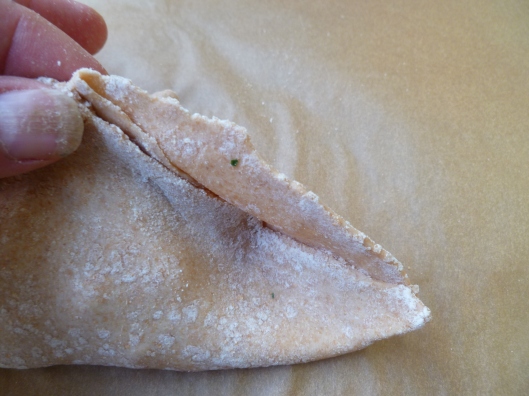 ….as best you can….the folds need not be perfect…

….until all the sides have been brought up to the center to form a pouch around the filling: 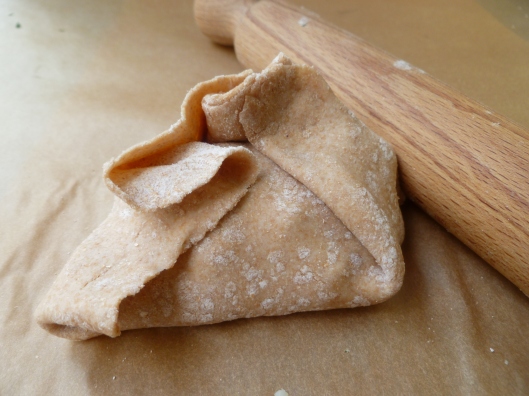 7.  At this point the Paratha will resemble a little dumpling:

8.  Press the gathered-up edges of the folds together a little with your fingers… 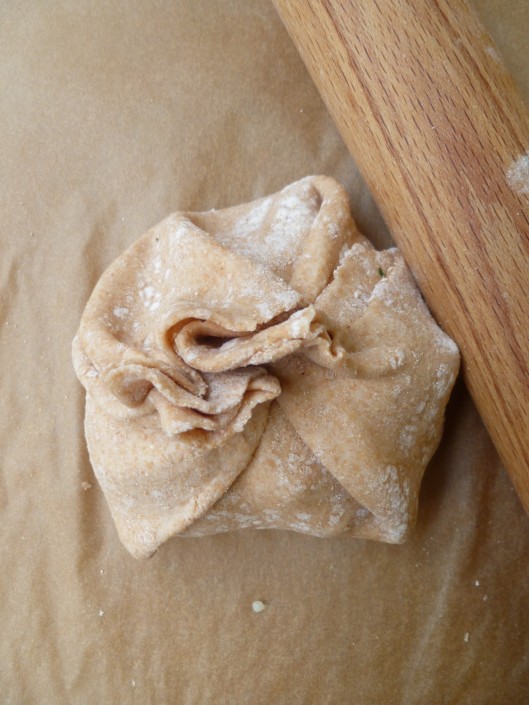 …and flatten them down with the palm of your hand: 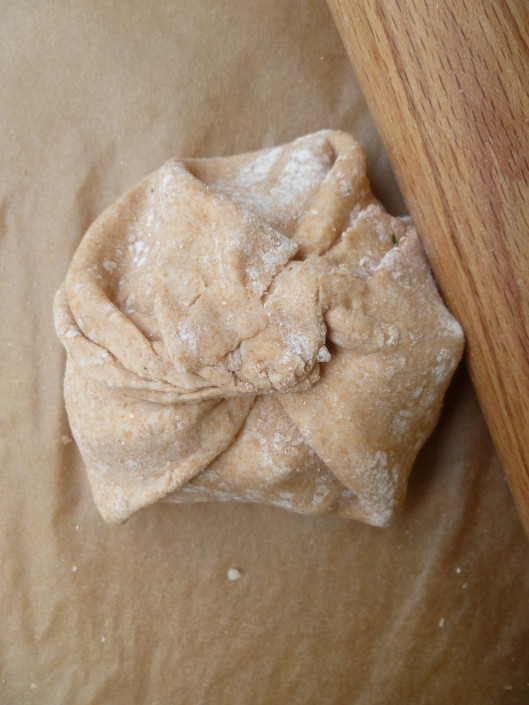 9. Turn the Paratha smooth-side up… 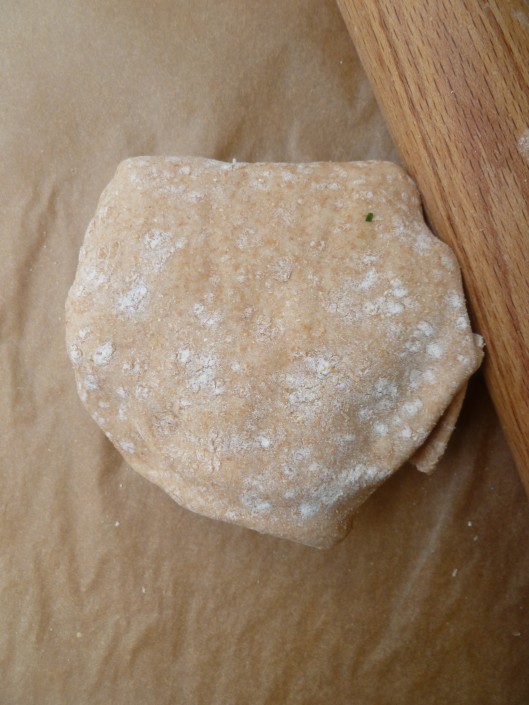 …and roll it out into a thin circle, about 7-inches in diameter.  If some potato filling escapes…it is ok.  Even big tears will be rectified in the frying:

10.  Transfer the Paratha to the parchment-lined baking sheet and roll out and fill the rest of the balls of dough in the same manner:

11.  Heat the griddle (flat side up) or heavy skillet over medium heat.  Brush the surface of either one with some vegetable oil.  When the griddle or skillet is hot but not smoking, place a Paratha on (in) it.  Fry the Paratha on one side until the edges of the round begin to rise. Press on it occasionally with the back of a spatula as it fries…the round will begin to puff and lighten in color on the uncooked top side. (This will take approximately 45 seconds.)  Turn the Paratha and fry it for another 45 seconds – 1 minute. The fried paratha will be a splotchy gold color: 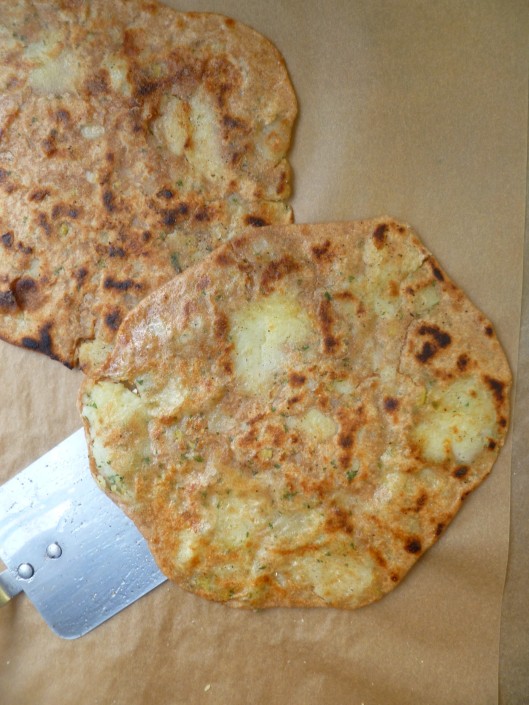 12.  Transfer the fried Paratha to a parchment-lined baking sheet and cover it with a cotton dishtowel to keep it warm while you fry the rest of the rounds in the same way, brushing a little oil on the griddle or bottom of the skillet between each frying.

13.  Mix the yogurt and mint together and pour into a small serving bowl.

14.  Cut the Paratha into triangular slices… 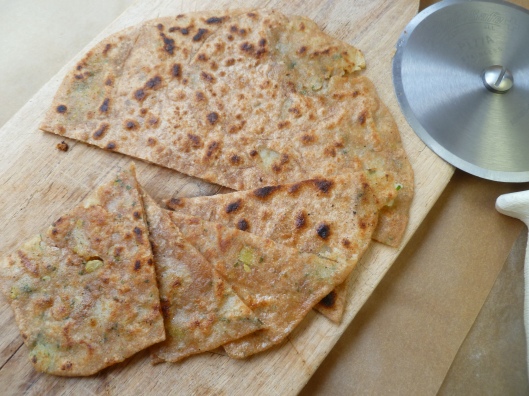 …and serve with the minted yogurt for dipping:

A Note:  Ranjana’s Alu Paratha are served as an hors d’oeuvre in the Lunch Menu:  A Lunch with Spice and Many Things Nice. 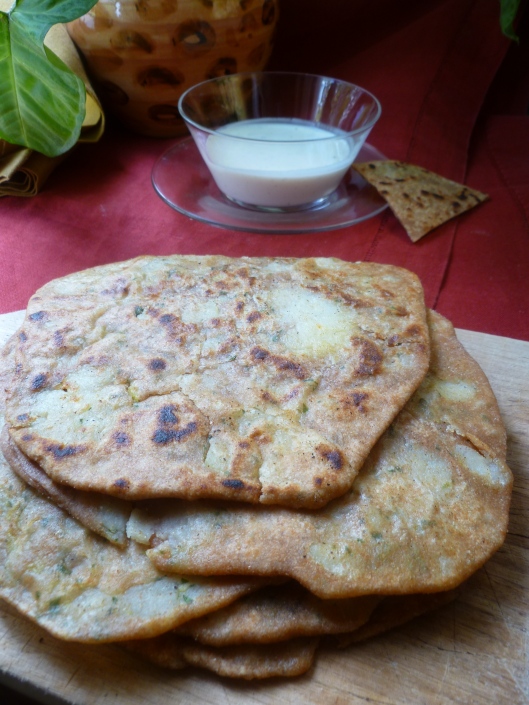 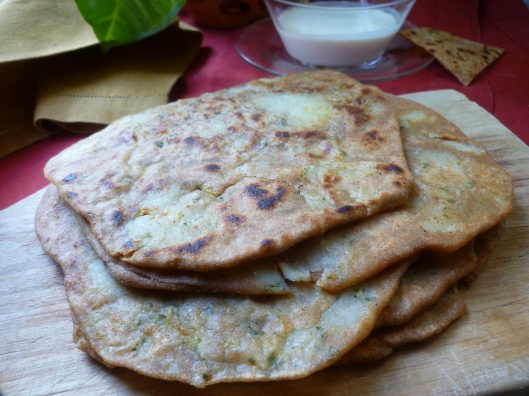