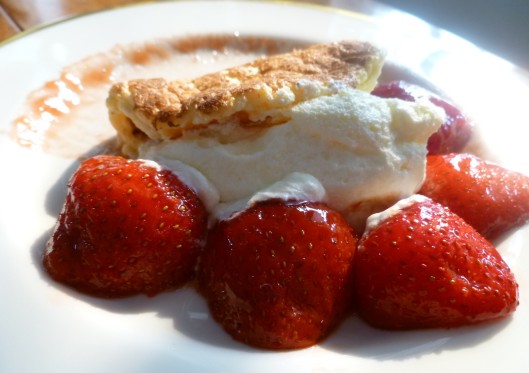 “Google” the term ‘dents de lion’ and the first entry that comes up will be images of dandelions and an explanation that ‘dandelion’ is a corruption of the French ‘dents de lion’, referring to the jagged leaves of the pretty weed.

However, ‘dents de lion’ is also the name of a dessert found in Dione Lucas’s The Cordon Bleu Cookbook (1947).  In 1942 she arrived in New York from London and established the Cordon Bleu restaurant (only open for lunch) and a cooking school.

The recipe described here has been altered in one significant respect–Mrs. Lucas suggests pouring rum over the finished dessert and lighting it at the last minute.  For a dinner for 10 people, this would be spectacular–one way or another.  Dents de Lion, however, is a worthy dessert even without the pyrotechnics.

For cookbook fanciers, The Cordon Bleu Cookbook makes  enjoyable reading. In it,  Mrs. Lucas lucidly describes many aspects of French cooking. Her style is brisk–neither oversimplified or too detailed–and full of enthusiasm for her subject. Perhaps that is why she is known as one of the great 20th century interpreters of French cuisine to an American audience.  Mrs. Lucas did not confine her teaching efforts to adults. Saturday mornings were reserved for children–of all ages.  “If they can walk and hold a spoon,” she wrote, “I will teach them to cook–simple dishes, to be sure, but a real step forward in the child’s education toward better living.” 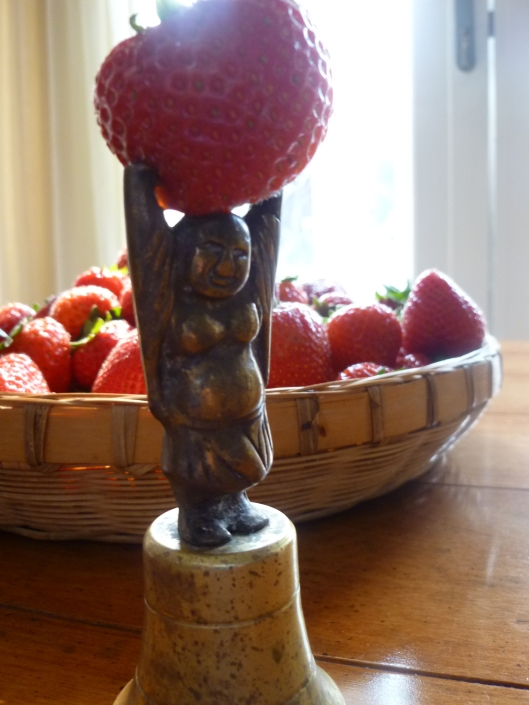 1.  Wash and hull the strawberries–50 of them, or 5 for each dessert plate: 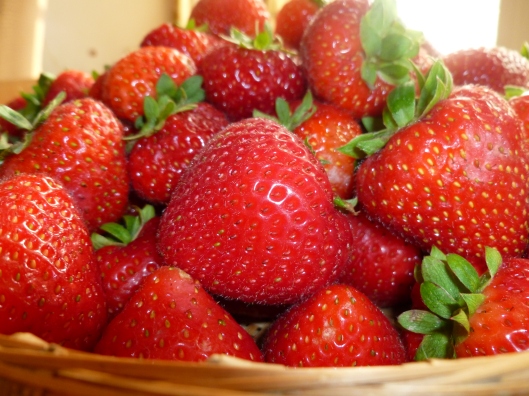 2.  Heat the jelly just until it warms and becomes more fluid.  Run it through a strainer into a bowl.  Dip the berries into the jelly and place them on a plate, cut side down. Reserve the rest of the jelly at room temperature.  Put the berries in the refrigerator until time to arrange the Dents de Lion on the plates.  The strawberries form the lion’s “teeth”.  They can be prepared early–in the morning of the day you are making the dessert: 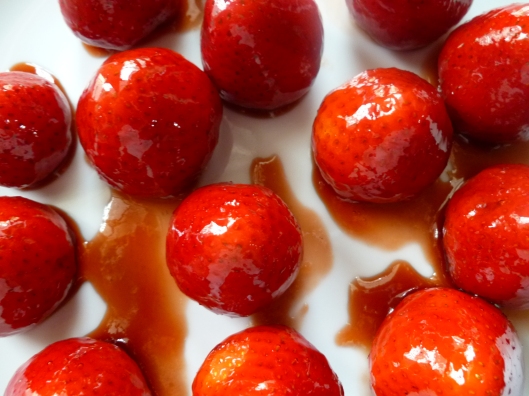 3.  The whipped cream  may also be prepared in advance.  Whip the two cups of heavy cream until it begins to form soft peaks.  Gradually add about 1/4 cup of powdered sugar as it continues to whip, more if you like it sweeter.  Continue to mix the cream until it forms stiff peaks.  (If you continue to beat it beyond this point, you will get butter.)  Tilt the bowl of cream upside down, and the cream should not slide down the sides of the bowl.  Cover it and refrigerate it: 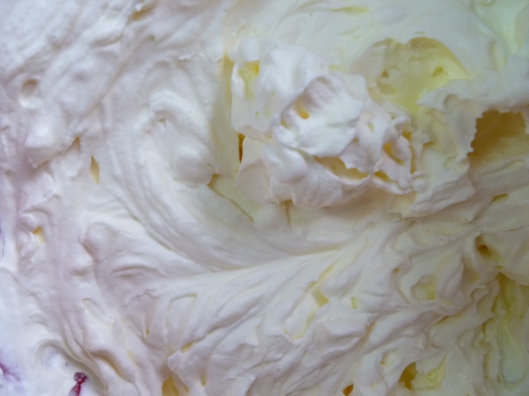 4.  The eggs are made into little omelets which will form the ‘heads’ of the lions.  They may be cooked an hour or so before the dinner and set aside on a cooling rack at room temperature.  If you are making a smaller amount of the recipe, they can be made right before serving.  They cook quickly.  Separate the eggs.  Mix the yolks with the sugar, cornstarch and salt.  Beat the whites until they form soft peaks, then lightly fold the yolk mixture into the whites: 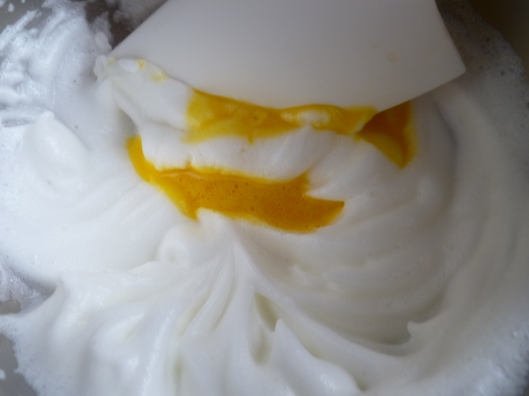 5.  When the yolks and whites are folded together, the mixture will look like pale yellow foam: 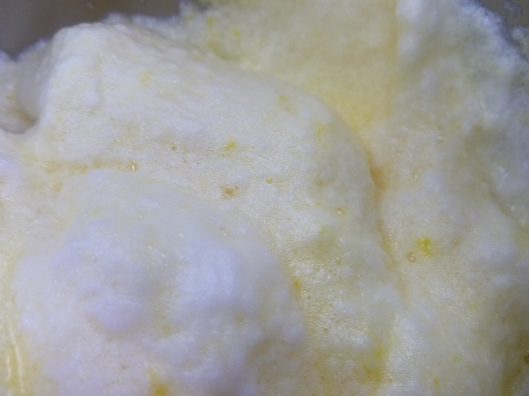 6.  Heat a little butter in the pan and swirl it around the bottom.  When the pan is hot, drop mounds of the egg mixture into it with a large spoon or ice cream scoop and lightly spread the mounds into circles of between 3 and 4 inches in diameter.  Make 3 or 4 at a time: 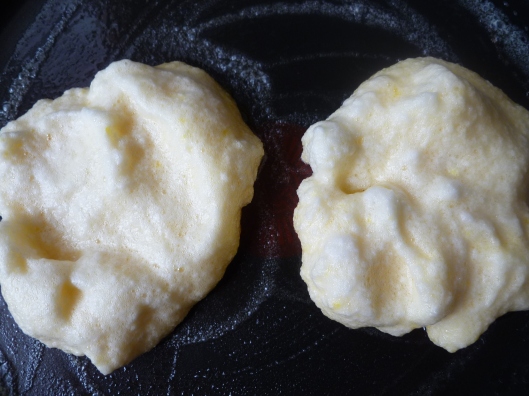 7.  In a couple of minutes, steam will rise from the little omelets–a sign that they are probably brown on the underside and ready to turn.  Flip them.  When the second side is browned, slide a spatula under the omelets, one by one tipping them sidewise to touch the sides, here and there, against the hot pan.  This firms them a little and makes the omelettes easier to handle: 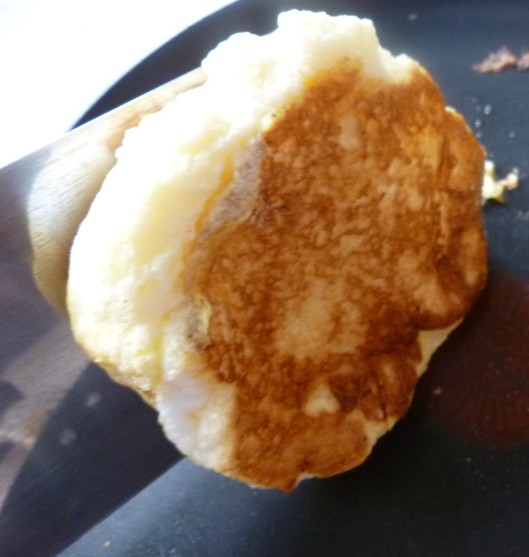 8.  Set the omelets aside on a cooling rack until it is time to arrange them on plates: 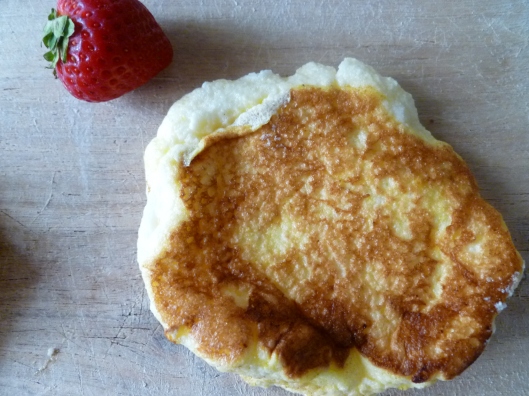 9.   Just before serving, arrange the Dents de Lion on the dessert plates.  First, with the pastry brush, make the lion’s ‘mane’ on each plate by brushing jelly in a semi-circle from the center towards the inner edge of the outside rim–all around half of the plate: 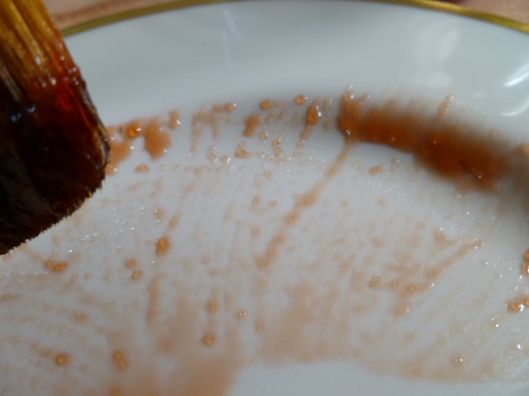 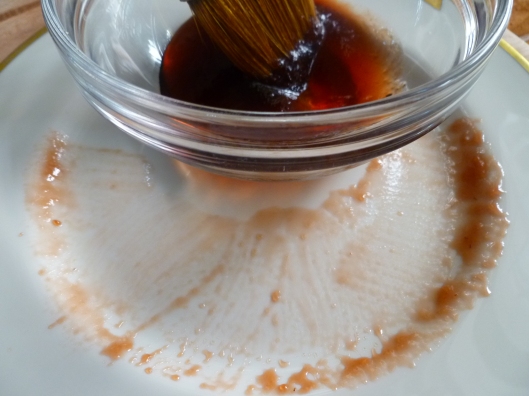 11. Pick up an omelet, put a dollop of whipped cream in the middle of it and fold the edges in toward each other.  This is the lion’s ‘head’ and ‘beard’.  Place it in the middle of the plate, below the mane, the straight side of the omelet next to the inner edge of the ‘mane’.  Place the strawberries around the curved edge of the omelet and whipped cream.  These are the ‘teeth’: 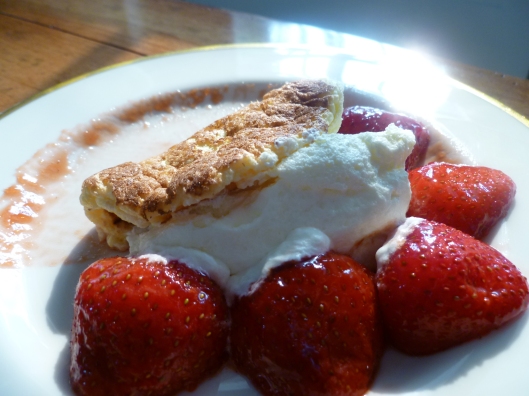 12.  Run a sieve of powdered sugar over the Dents de Lion.  This is a royal way to use strawberries… 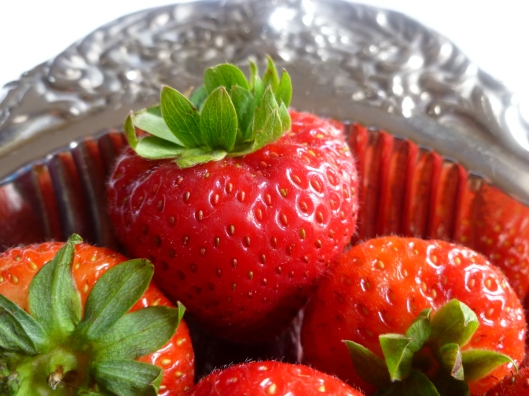 A Note:  Dents de Lion is included in the Dinner Menu: A Welcome Dinner for an Out-of-Town Visitor who has Traveled Far.