Mrs. Philip Waters, a member of Charleston, South Carolina’s Junior League, contributed her mother’s recipe for Merry Tomatoes to the League’s cookbook Party Receipts.  She prefaced the recipe with the comment, “My mother’s Christmas buffet is considered incomplete without [them].”

Wisely, Mrs. Waters’s mother chose not to use the time before her buffet hollowing out dozens of little tomatoes and stuffing them with teaspoons of filling.  Instead, she put the tomatoes in a serving bowl, poured vodka over them, and placed toothpicks and lemon pepper nearby, so that grazers could spear themselves a tomato, and dip it in the pepper.  I intended to try the recipe–but was sidetracked by the idea that tomatoes might also be made merry with a pitcher of Frozen Margaritas. 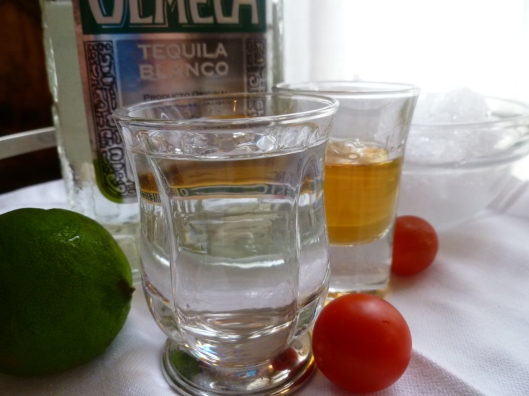 Do the first two steps of the recipe at least an hour in advance of serving.

1.  Mix the lime juice, tequila, and liqueur with 2 cups of ice in the blender until it becomes slush.  Two cups is more than twice the amount of ice you would use for making the drink.  With a lesser amount of ice, the slush will be very thin.  Put the frozen Margarita mixture in a freezer container and put it in the freezer.  Because of the liquor in it, it will not harden.

2.  Squeeze some lime juice onto a saucer.  Scatter some coarse salt on another saucer.  Dip the rims of the shot glasses in the lime juice and then in the coarse salt.  Put them in the freezer, as well.

3.  About 20 minutes before serving this hors d’oeuvre, put the cherry tomatoes into the Frozen Margarita slush.  Leave it all in the freezer until you fill the shot glasses.  The tomatoes will freeze.  (If you like frozen grapes, there is a good chance you will like frozen tomatoes.  Their textures are similar.)

4.  Take the shot glasses out of the freezer.  Put some slush, a tomato, and a spoon in each: 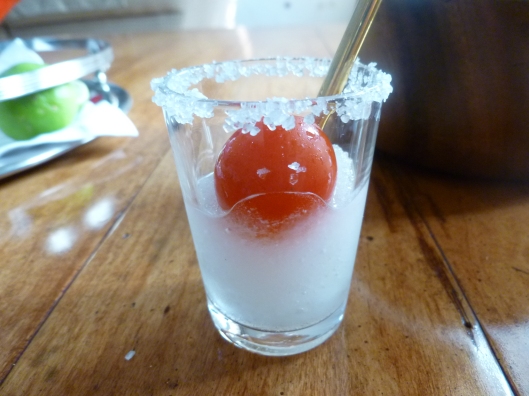 5.  Arrange the shot glasses on a tray and pass them around…the tomatoes still look pretty merry: 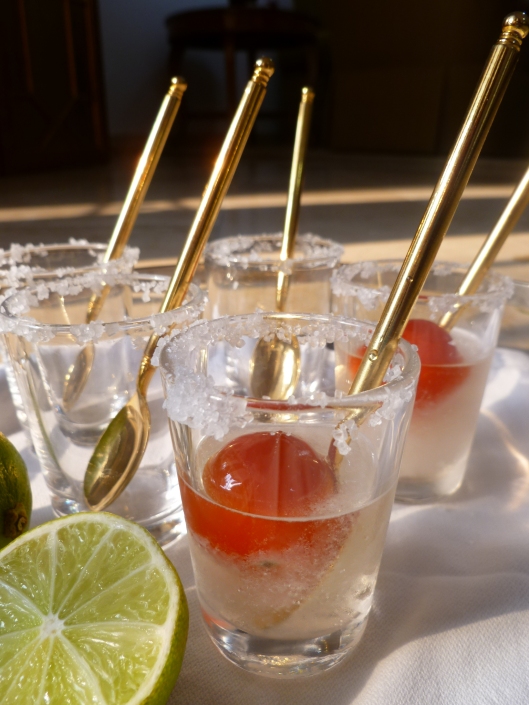 A Note:  Frozen Margarita Tomatoes are one of the hors d’oeuvres listed on the Dinner Menu:  A Welcome Dinner for an Out-of-Town Visitor who has Traveled Far.