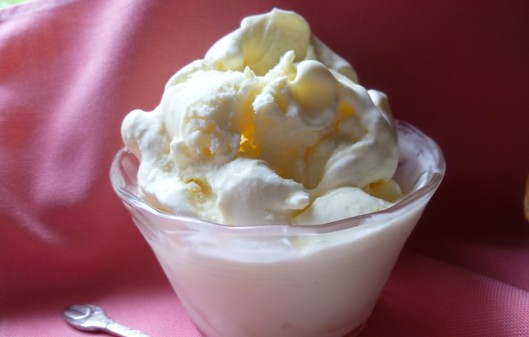 There are those who regard vanilla ice cream as a vehicle for chocolate sauce and would never consider eating it any other way.  The purist’s feelings ought to be respected, but there are other serene souls who will accept a dessert without ice cream with no complaint, but who will eat it even more happily ‘with’ if given a choice.

Making good ice cream at home is extremely easy.  If the ingredients for the ice cream are good, the results will be, too–whether you use a cheaper machine or an expensive one.  I have used the same recipe in a cheap model in which a tin cannister of ice cream mixture fits down into a plastic bucket filled with ice and coarse salt, and in a somewhat more expensive model that involved freezing gel-filled freezer bowls before putting in the mixture and turning on the paddles.  The only real difference between these two makers had nothing to do with the ice cream they turn out–only the amount of labour involved in getting them to do it.

Recently, I tried the same ice cream mixture in another machine, a sleek gray Italian one with its own built-in freezing unit.  At $250 on sale,  I consider it  pricey.  It does make ice cream that I think anyone would pick out as the best in a blind taste test.

But all three of them produce ice cream that is better than any from a store.  Compare the recipe below with the list of ingredients on cartons of even the most expensive brands and you will see why.

1.  Put the milk and sugar in a heavy saucepan and heat it, stirring, until the sugar is dissolved.

2.  Pour the milk and sugar mixture into a bowl and whisk in the heavy cream, salt and vanilla.  Place the mixture in the refrigerator, covered, until it is cold.

3.  Pour the ice cream mixture in your machine and freeze it according to the directions for that maker.  Finished ice cream, ready to store in the freezer, looks like this: 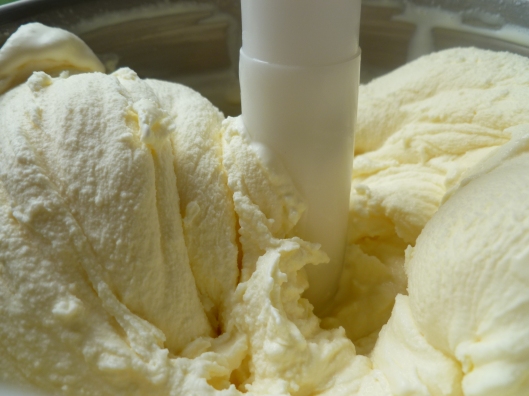 4.  Transfer the ice cream to freezer containers.  Glass ones are very good because the ice cream is less likely to pick up other flavours or develop ice crystals.

A Note:  Homemade ice cream straight from the maker, as shown in the photo at the top of this post, is like frozen custard.  After it has hardened in the freezer for several hours, it will look like this:

Hardened ice cream is preferable for serving with Raspberry Pie in the Dinner Menu:  Dinner at Summer’s End since it won’t melt as quickly as the freshly made does: 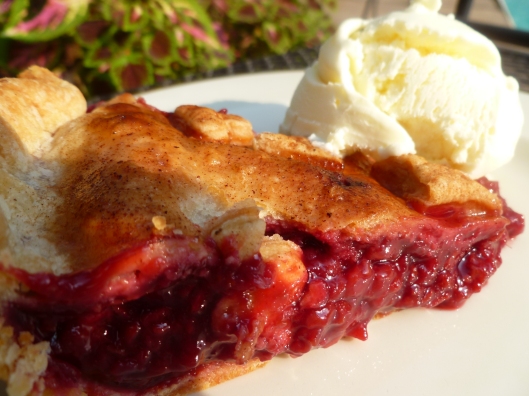