Eating bread fresh from the oven with a meal is a small luxury.  For one person, doing all the cooking for that meal, it should be nigh-on impossible to arrange.  Especially if the meal is a multi-course dinner or lunch and the bread is to go with soup or salad.  However, it is not impossible–or even difficult.  Swiss Soft Rolls are extremely user-friendly.

The recipe for these rolls belongs to a pastry chef who did his apprenticeship in a Swiss hotel and learned to make them there.  Hence, the name.  He had been hired to run the baking side of the kitchen in a new hotel in southwestern China.  It was not the peak tourist season and anyway, the hotel was just barely open.  So he was not too busy to notice the family of six who came down to breakfast every morning and ate a lot of those rolls.  This chef was enthusiastic about what he did for a living and invited a member of the family to come to the kitchen one afternoon and learn how to make the rolls they liked so much.

Swiss Soft Rolls (makes at least 2 dozen, depending on their size; the recipe is easily halved, also)

A Note about the Ingredients and Equipment:  Unlike most diplomatickitchen recipes, this one is given in metric measurements and the butter and all the dry ingredients are weighed on a digital kitchen scale and transferred to the bowl of a mixer.  There is less variation in the dough using this method.  Also, the rolls are easy to make of uniform size by cutting and weighing the pieces of dough.  Having acquired a digital scale for the sole purpose of making these rolls, I subsequently came to appreciate its many other uses.  It pulls its weight in a kitchen.  But if only for the occasional dozen rolls , I would count mine worth having.

Preparing the dough for baking:

1.  Measure all the dry ingredients into the mixing bowl except the salt and mix them well, using the flat beater attachment.

4.  Slowly add a little over half of the water.

5.  Increase the mixing speed and add the butter.

7.  Replace the flat beater attachment with the dough hook and knead the dough until it is elastic and pulls away from the sides of the bowl.

8.  Shape the dough into rolls.  (The ones in the photos are formed from pieces of dough weighing about 50 grams each.)  Roll each piece into a ball, pinching the dough together at the bottom to tighten the surface of the ball.

9.  Place the balls on baking sheets–either oiled and floured or lined with parchment paper.  With scissors, cut a cross in the top of each of them:

Baking the rolls directly after they are formed and on the sheets:

1.  If you want to complete the rolls right after making the dough and forming it into balls, spray the balls with water and let them rise. They do not have to be covered.  (Rising times vary.  A good estimate is about 1 and 1/2 hours.)

2.  While the rolls are rising, preheat the oven to 500 F.  Spray the rolls with water again and sieve some flour over them:

3.  Place a pan of water on the bottom rack of the oven, and a tray of rolls on the middle rack.  Turn the oven temperature down to 400 F. and bake the rolls for five minutes.  Open the oven door and spray the rolls.  Bake another five minutes and spray the rolls again.  Bake for a final 5 minutes.  (Bake one sheet of rolls at a time if two trays will not fit together on the same oven rack.  Standing at room temperature won’t harm the rolls that wait.)  Remove the rolls to racks: 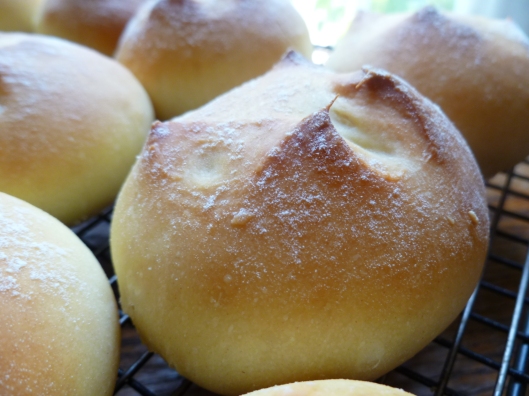 Timing the baking of the rolls for a Lunch or Dinner–a Soup or Salad Course:

1.  Form the rolls and cut crosses in them.  Instead of letting them rise, cover them with plastic wrap and freeze them until the day you want to bake them.  The rolls will thaw and rise in approximately four hours, but once ready to bake, can wait at room temperature longer than that before going in the oven.

2.  Take the rolls out of the freezer, unwrap them, spray them with water, and leave them to rise.  Preheat the oven to 500 F.  When the rolls are ready to bake, spray them again with water and sieve flour over them.  (The rolls bake in 15 minutes.  But if the oven holds only one tray on a rack, bake only one tray at a time and begin baking earlier.)

3.  Place a tray of water on the bottom rack of the oven.  Place a sheet of rolls on the middle rack.  Reduce the oven temperature to 400 F.  Bake the rolls for 5 minutes.  Open the oven and spray the rolls.  (If you don’t have time to spray the rolls, leave out that step. The rolls will still be good.) Bake them another five minutes.  Spray them again.  And bake them for a final five minutes.  Transfer the rolls to a rack.  Then place them alongside a Soup or Salad Course:

A Note:  The dough for Swiss Soft Rolls is used to make Petits Cochons ~ Little Pigs, an hors d’oeuvres in the Dinner Menu:  Dinner at Summer’s End.

A Suggestion:  The baked rolls may be wrapped individually in plastic wrap and frozen.  Take out a few at a time for breakfast. Thaw–they reheat very well and are very good with butter and thick honey: