Blini are yeast batter pancakes, traditionally made with buckwheat flour.  The ones in this recipe are made with homemade quinoa flour, which is—quinoa ground in a blender.  However, quinoa and buckwheat flour are interchangeable, and using the traditional ingredient will work just as well in these Blini.  (And, for those living in lands whose food suppliers are primarily French:  a French bag of buckwheat flour in your grocery store will be labeled ‘Sarrasin’.)

Quinoa Blini and Gravlax is, at the same time, a fresh and sophisticated dish and…a comfort food.  It is a case of culinary counterpoint:  soft, warm little pancakes with something cool and salty on top of them.

Gravlax, one of those toppings, dates back a long ways–to the Middle Ages, when salmon was salted and fermented by burying it in the sand on the seashore.  Now it is “buried” in salt, sugar, dill and mustard seed–but no longer on a sandy beach.  The name, however, still reflects the salmon preparation’s origins:  ‘grav’, according to Wikipedia, being the word for ‘grave’ in Swedish and Norwegian, and ‘lax’ the word for ‘salmon’.

Quinoa Blini with Gravlax, Horseradish Cream and Caviar (for about 16 small blini)

I.  The Blini from Starter to Griddle: 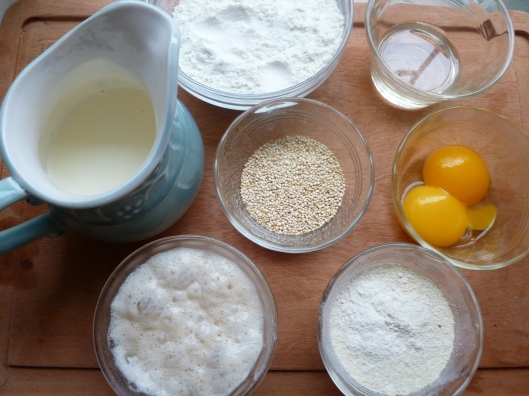 Ingredients for the Starter:

A.  Making the Starter:

1.  Warm the milk a little and mix it in a small bowl with the yeast and the powdered sugar.

3.  Cover the bowl and let the Starter sit 20 minutes…or longer–it makes no difference.  The Starter will rise and bubble:

B.  Mixing the Blini Batter:

1.  Grind the quinoa very fine in the blender: 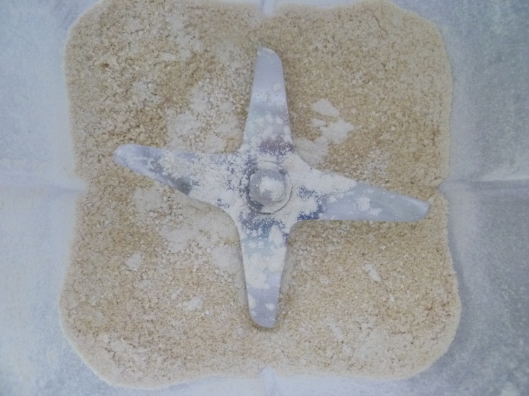 2.  In the large-ish bowl, combine the regular white flour, the quinoa flour, salt, the egg yolks, Starter, and heavy cream:

3.  Cover the batter and let it rise for an hour.  Then, beat the egg whites until they are snowy and form peaks, and fold them into the batter along with the vegetable oil: 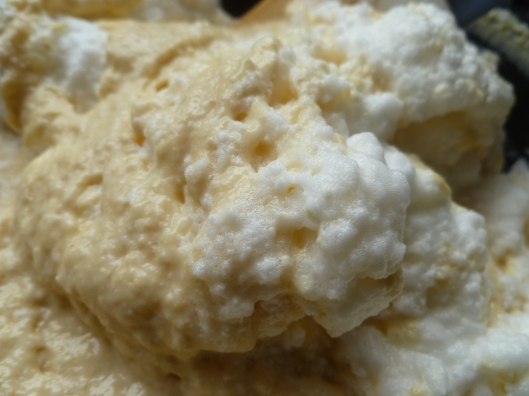 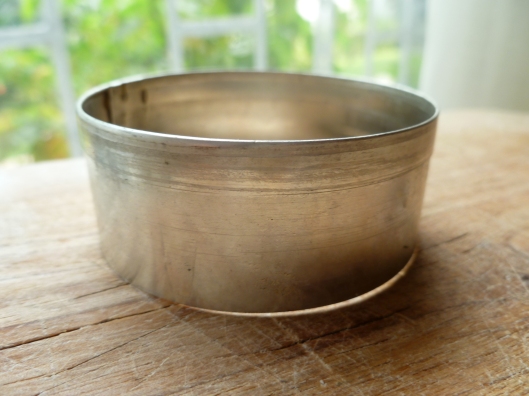 1.  Heat the griddle over medium heat.  If you make the Blini in a ring, you can make 2 at a time using one ring and the following method.  Without the ring, the method is essentially the same, and the cooking time perhaps a little shorter.

2.  Place the ring on the hot griddle.  Pour in the batter to cover the inside of the ring (about 1/8 of a cup in a 2 and 1/2-inch ring).  The batter will rise up the sides and small bubbles will form: 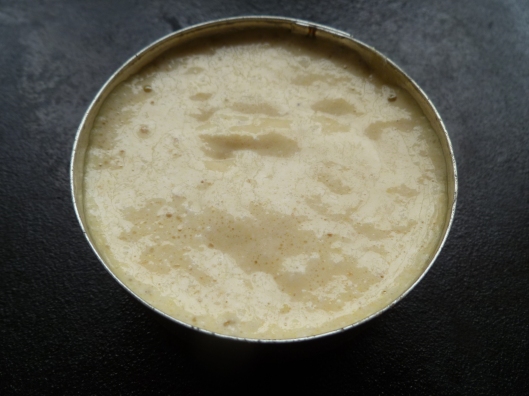 4.  Cook it for a minute to allow the edges to set and then remove the ring.  If necessary, use a knife to loosen the pancake from the edges of the ring: 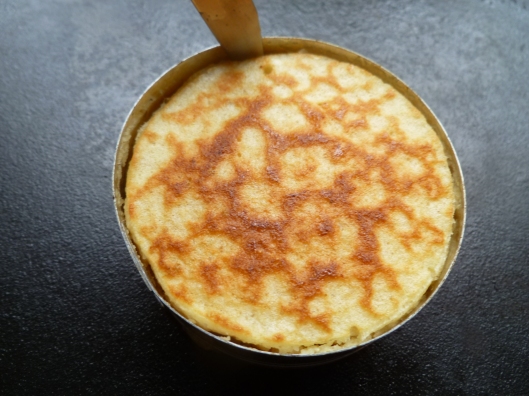 5.  While the first pancake continues to cook on the second side (perhaps for another minute or two), place the ring back on the griddle and pour batter into it again.  Cook the second pancake in the same way as the first one:  a couple of minutes on the first side, turn, after a minute of further cooking, remove the ring and refill it with batter:

Using the ring as a mould, this amount of batter will make about 16 Blini. Unused ones may be wrapped individually and frozen: 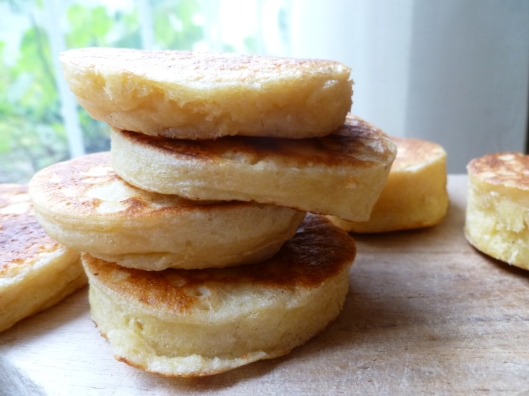 6.  Pull away any ragged edges.  They will come away easily, without a knife:

7.  As they are done, transfer the Blini to a cotton towel-lined plate and cover them with another towel or napkin to keep them warm.  If they are being served later in the day, leave them covered at room temperature and, shortly before serving, place them on a parchment-lined baking sheet, cover the sheet with aluminum foil, and reheat at  200 F.

II.  Putting on the Toppings:

Ingredients:  Exact amounts will depend upon how many you make.  These Blini are part of a Dinner Menu for 2, but the recipe will make enough Blini for a First Course for 6 – 8 people. 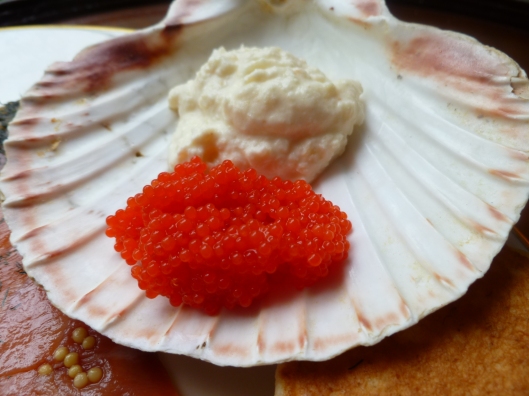 1.  Mix equal parts of Horseradish and Heavy Cream by Tablespoonfuls until the amount is enough for the number of Blini being used.  For 4 Blini, a couple of Tablespoons of each will be more than enough.  Change the proportions to include more cream than horseradish for a milder sauce.

3.  Fold a piece of Gravlax onto each one, then add about a teaspoon of Horseradish Cream on top of the salmon, and finally, a sprinkle of caviar. 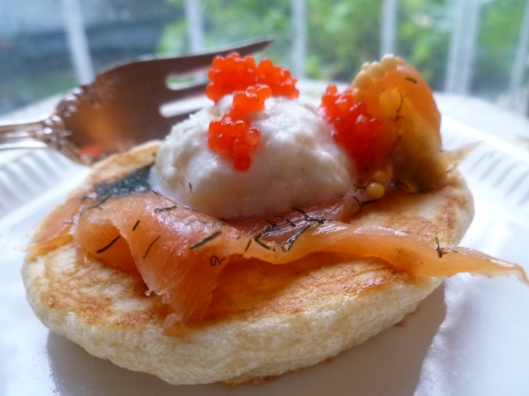 A Note:  Quinoa Blini with Gravlax, Horseradish Cream and Caviar is served as the First Course for the Dinner Menu:  Killing Time with a Killer.  It is a Dinner for Two, but the recipe will make enough Blini for a First Course for 6 – 8 people (2 Blini for each person.) 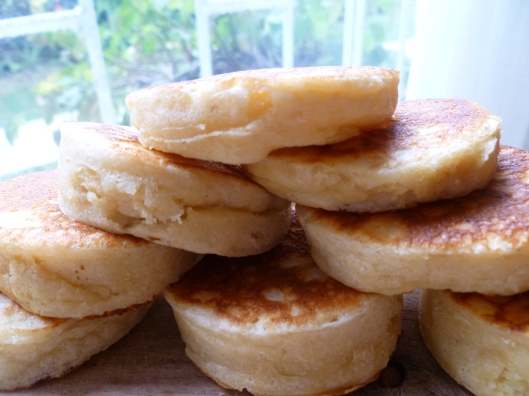 Second Note:  The singular form of ‘Blini’ is ‘Blin’.