“My mother…had learned to cook when a girl…She learned the feel of foods, such as the lightness of brioche dough when ready for the oven…she knew how foods should look…she could tell freshness by smell…she learned to taste with discrimination…The way a French housewife does use her senses instead of depending entirely upon recipes and mechanical aids is, I think one reason why women like my mother thought of cooking as a creative art, never a tiresome chore.”  (from Louis Diat’s French Cooking for Americans, 1946)

There is no recipe or piece of kitchen equipment that can ensure foolproof results.  A recipe may be a good guide, but, as everyone knows who uses them or writes one down to give to a friend,  behind the steps outlined on the printed page is the human element which can’t be reduced to measures and directions.  How things look and feel and taste are all judgement calls that depend on who is doing the cooking–not what the cook is doing it with.

This point is nicely expressed by Mr. Diat in the quote from the introductory essay to his French cookbook for an American audience in which he describes the kitchen of his childhood home and the person who presided over it–his mother.

Making Lemon Curd and a Coconut Crust lend practical culinary substance to the point.  Each begins with a good recipe.  Neither chains a cook to a strict set of instructions–in fact, just the opposite.  They are easy and interesting opportunities for developing “cooking senses”.

Note: To print this recipe, or any other diplomatickitchen recipe, go to the bottom of the page, at the end of the post, and click on the icon: Print & PDF.

1.  Crack the eggs into a bowl , beat them well, and set them aside.

2.  Put the lemon juice, zest, sugar and butter in the top of the double boiler: 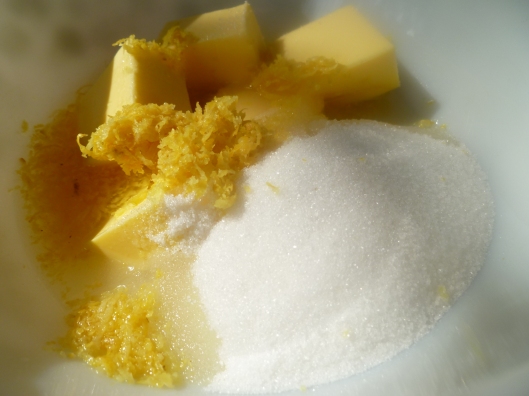 3.  Bring the water in the bottom of the double boiler to a simmer and heat the mixture, whisking it now and again, until the sugar dissolves and the butter melts.

4.  Pour in the eggs, now whisking all the while, and cook the mixture, whisking it continuously, over the simmering water without letting it boil:

5.  Continue stirring.  Presently, steam will begin rising  from the curd, and little bubbles will form on the surface.   At first the curd will leave only a film on a spoon.  It will taste thin.  Gradually, you will see a change in its consistency as you continue to stir and cook it.  The curd thickens and forms an opaque coating on the spoon…

…and its color deepens: 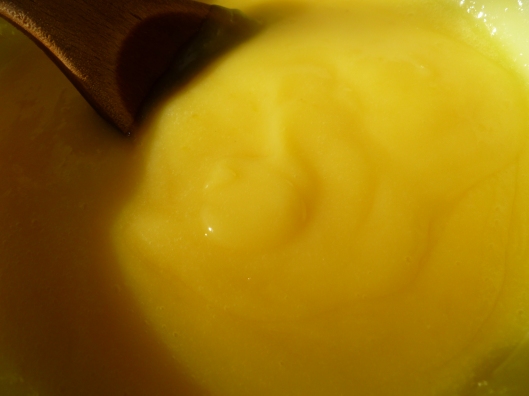 6.  Remove the curd from the heat and put it in one or a couple of jars.  Wait until it cools to cap and refrigerate the curd.  If you erred on the side of caution and cooked the curd a little less than the optimum, it will thicken more after being refrigerated. It should be well chilled before putting it into the tart shell. 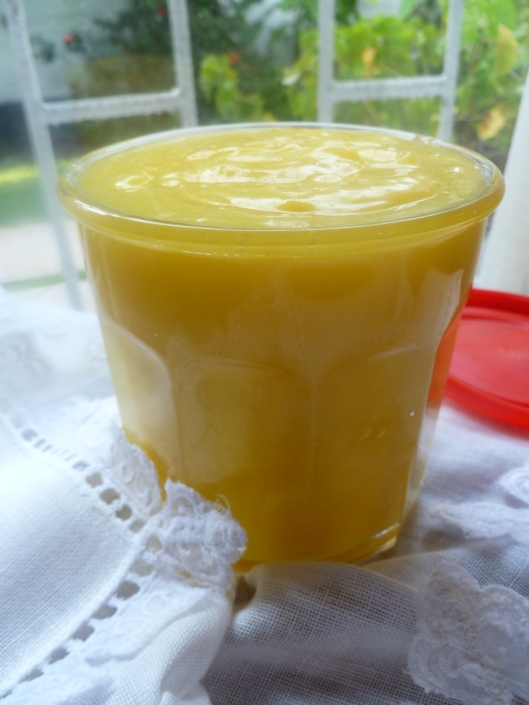 A Note:  The curd will keep for several weeks at least, stored in the refrigerator.  It is very good on bread or scones as well as in a tart.

Part II:  Making the Coconut Crust (for an 11-inch Tart) and Putting the Tart Together 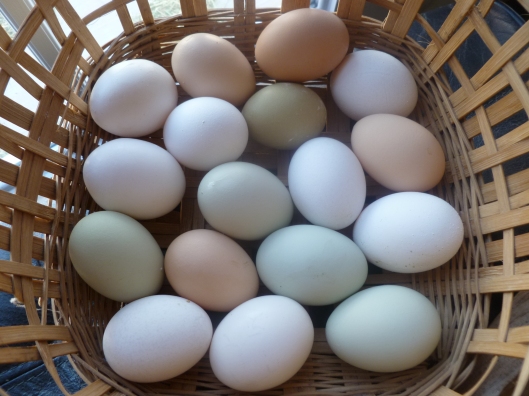 1.  Preheat the oven to 325 F.  Grease the tart pan very well with the softened butter.  With your fingers, run butter vertically up into the ridges of the sides of the pan.

2.  Put the coconut and the sugar in the blender or processor and mix until the coconut is finely chopped.

3.  Blend in the egg whites and vanilla.

4.  Test the consistency of the crust mixture.  Put a handful of it on a large spoon or on a saucer.  The crust should hold its shape.  It should look and feel like it holds together loosely.  If it doesn’t, add some more coconut, process the mixture again briefly, and check the consistency again: 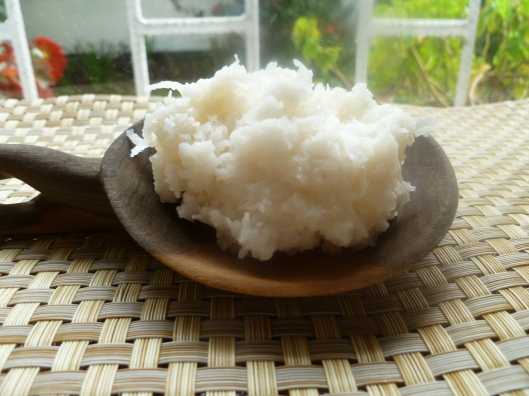 5.  Press the crust into the tart pan:

The crust is thick:

6.  Put the tart shell in the preheated 325 F oven.  After 20 minutes, remove the tart from the oven and press on the sides and bottom of it with a spoon to define the crust better…

Then return it to the oven for another 20 minutes, or until it has turned a golden brown:

7.  When the tart shell is done, remove it from the oven and place it on a stable base (such as a large, flat-bottomed measuring cup or bowl turned upside down) and slide the metal ring of the tart pan down from the sides of the crust.  Run the icing spatula or knife under the crust to loosen it from the bottom of the pan:

8.  Slide the crust onto the Parchment paper on the cooling rack.  (The paper prevents the crust from sticking to the wires of the rack.)

9.  Cool the tart shell and fill it with the cold lemon curd: 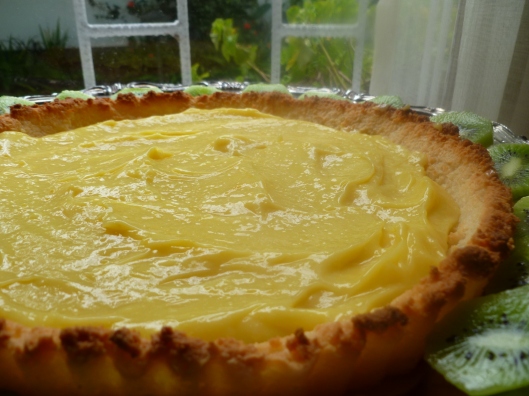 10. Circle the tart with rounds of sliced Kiwi if you use them:

…And if you find that your first batch of Lemon Curd is still on the thin side after it has been refrigerated, there is a remedy:  Do not fill the tart shell.  Instead, cut the Coconut Crust into wedges, place one on each plate, and spoon the curd onto each piece of crust.  Decorate the desserts with kiwi slices…and all turns out well.

A Second Note:  The Dessert in the Lunch Menu:  Lunch from the Grill in the Congo is Lemon Curd Tart with Coconut Crust.

A Second Note:  Jane Grigson’s English Food is an excellent source on the subject and provides the basis for the diplomatickitchen’s version of Lemon Curd.

A Final Note: You can join openlibrary.org for free and read Louis Diat’s “My Mother’s Kitchen” online in his book French Cooking for Americans.