In the early seventies, pesto’s appearance on American menus and in America’s kitchens was as rare as it is ubiquitous today.  For a New York restaurant to offer pesto made with fresh basil was considered newsworthy.  Giambelli 50th on Madison Avenue and 50th did offer it–year round–and grew its own basil to do it.

Until the restaurant closed in 2009, Giambelli’s was known in the city for its classical northern Italian food and stylish–not trendy–ways.  More than a few history-makers dined there in the years after it opened in 1954.  When Pope John Paul II visited New York, Giambelli’s provided the meal held in his honour at the Cardinal’s residence.

There were many reasons on the menu to eat at Giambelli’s besides the pesto.  But this is a story about pesto and about two girls who went to Giambelli’s to eat it.  They were students on the Upper West Side—18 years old and not likely patrons for a restaurant like Giambelli 50th.  They liked food more than they knew food.  Both had come to New York from very small worlds.

A restaurant reviewer’s description of  the pesto served at Giambelli’s made the garlic and fresh basil sauce sound so very good and unique that the two girls decided to make the trek across town and try it.  As an aside, the reviewer advised against eating in the main ground level dining room and recommended asking for a quiet table on the upper level.  Accordingly, the girls so requested when making their reservation.

They arrived at Giambelli’s on a Friday night.  Empty tables were few but diners,  seated on the plushy banquettes encircling the room, weren’t crowding each other. There were lots of flowers, sparkling crystal and happy, relaxed faces framed in soft lights.  And it was toward this pretty scene that the manager led the two new arrivals.  But no–they insisted–they had asked for a table “upstairs”.  The man looked a little surprised.  Wouldn’t they rather…?  No, they were firm–upstairs please.  They were in the know.

The girls got their wish.  Soon they found themselves seated, upstairs, quite alone, in a cavernous room clearly meant for overflow and big gatherings.  A seasoned waiter with gray in his sideburns, and an apprentice in attendance,  carted the chafing dish upstairs.  He heated the fresh pasta in little copper pans beside the table, mixed in the sauce, plated it and, seconds later, presented the girls with their first taste of pesto.  The way he served, the way he spoke–were welcoming–as though their choosing to dine in this cheerless cold hall was the most natural thing in the world.  He put them at ease.  They had…a very… good… time.

It was, in fact, a memorable time.  For to this day,  whenever one of those two diners considers a simple dish of pesto, she recollects… Giambelli 50th on Madison Avenue, where a waiter full of years and experience showed a kindly forbearance  toward rough-around-the-edges youth.

I.  Making the Base for the Soup

1.  Heat the oil in the pot and sauté the onion, celery, carrots, tomato and garlic until they are softened.

2.  Add the water, the bouillon cubes, thyme and parsley.  Cover the pot and simmer the soup base for 15 minutes.

3.  Strain the liquid through a colander or sieve into a large bowl.  Put the vegetables from the base into the food processor and purée them.  Return both the liquid and the puréed vegetables to the pot.  Add freshly ground black pepper and salt as you like.  The soup base is ready.

Ingredients:  The vegetables included here are meant to suggest, not dictate what goes into the soup.  Whatever vegetables happen to look especially nice and “Spring-like” are candidates:  baby turnip greens, baby turnips, some green garlic, or fresh peas– for example. 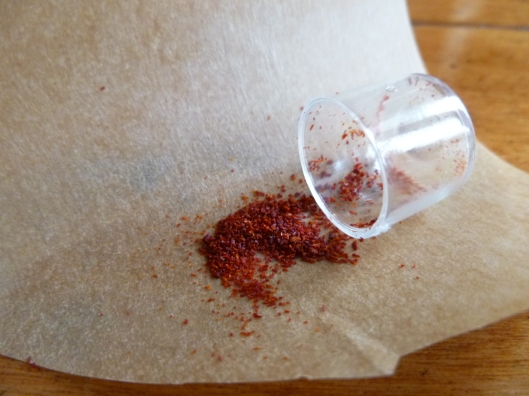 1.  Heat the oil in the pot or pan.  Add the onion, garlic, carrot, celery and thyme and cook them, stirring them about, until they have softened–for about 5 minutes.

2.  Add the softened thyme-flavoured vegetables to the pot of soup base, along with the small cubes of tomato (if you incude it), the zucchini and the diced green beans and cauliflower fleurettes.  Sprinkle in the saffron as well and add the Parmesan rind if you have one:

3.  Bring the soup to a boil, and then reduce the flame so that the soup simmers gently.  In perhaps 15 minutes, when the vegetables are just tender, this version of Spring Vegetable Soup is done.  Remove the Parmesan rind.  Serve Pesto alongside the soup.

Note:  This version of Pesto is not timid.  It has a bite.  Reducing the number of garlic cloves will reduce the bite. 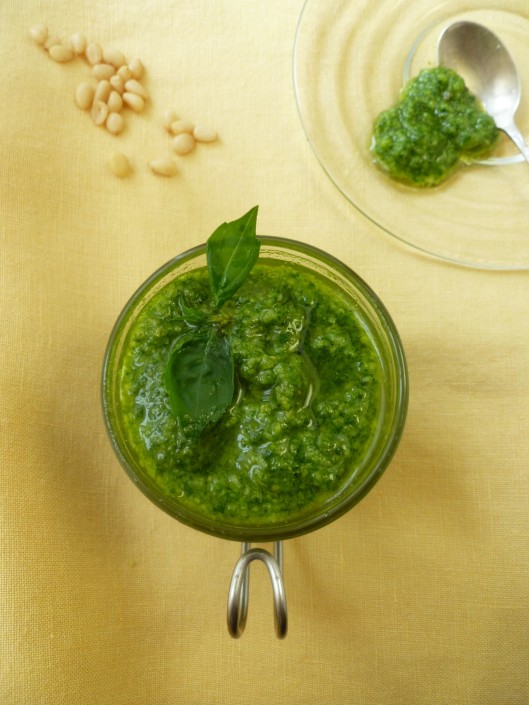 1.  Place the basil leaves, pine nuts and olive oil in the processor and mix them together well.

2.  Add the Parmesan and 1/2 teaspoon of salt and process again.  Taste the Pesto and add up to 1/2 teaspoon more salt, if you consider it necessary.

3.  If you aren’t using the Pesto immediately, pour it into a small bowl, drizzle the surface of it with some olive oil, and place a piece of plastic wrap directly on the surface to seal out air.  Set the bowl of Pesto aside at room temperature until you serve the soup.

4.  Put the Pesto in a serving bowl or in several small bowls set at intervals on the table from which guests may add Pesto–or not–to their soup.

A Note:  To store any leftover Pesto, put it in a jar, drizzle some olive oil over the surface, place a piece of plastic wrap directly on top of the olive oil, screw on the lid and refrigerate it.

A Second Note:  Spring Vegetable Soup with Pesto is the First Course of the Dinner Menu:  Dinner in Early Spring.