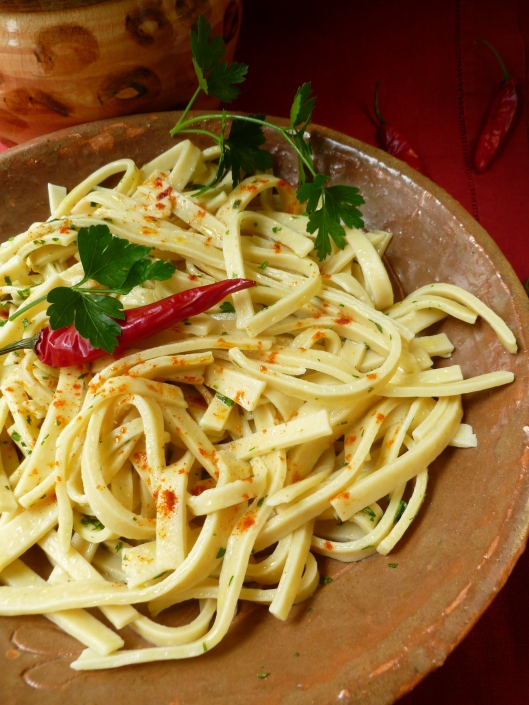 A lady I once knew believed that if she ate a chicken, she ought also to have raised it and executed it.  She did not extend this holistic principle to all aspects of her life; rather, she inserted it here and there.  Andy Crouch, in his article “Eating the Supper of the Lamb In A Cool Whip Society” considers this sort of insistence on doing some things the hard way a good thing.

Mr. Crouch’s article is primarily an overview of philosopher Albert Borgmann’s ideas about how technology affects society and individuals.  The food prepared for us courtesy of these technologies highlights Mr. Crouch’s discussion.  A convenient container of Cool Whip, for example, is a high-tech production made for us out of these ingredients:

Clearly, one couldn’t go into the kitchen and mix up a batch of Cool Whip. Technology whips up the Cool Whip and presents us with a time and trouble saver.  Instead of whipping the cream, one opens a carton, and the people who begin their cooking careers with Cool Whip may never even attempt to deal with the real thing.

So what?  Well, says Mr. Crouch (and Mr. Borgmann), there is an inherent satisfaction in owning a skill and using it.  When we give up our skills in favour of convenience, we lose something valuable.  On another level, spending our time to do something technology could do for us, and happily taking on that burden is good for the spirit.  And a meal home-cooked without convenience foods is, Mr. Crouch acknowledges, a burden of sorts even for the enthusiastic cook.  It is a personal sacrifice of time and energy that spreads around a lot of happiness–both to whoever is doing it and to those for whom its done.  The article is thought-provoking without being cranky.  Neither Mr. Crouch nor Mr. Borgmann are 21st century Luddites who eschew all labor saving devices as a matter of course.

Homemade Egg Noodles is a likely candidate for applying the principle of ‘doing it the hard way’ for the sake of one’s well being and happiness.  The recipe is adapted from one by Edna Lewis that appeared in her first cookbook, written in collaboration with her student and friend Evangeline Peterson.

A homemade noodle is hardly recognizable as a relative of a packaged one.  They have about as much in common as… real whipped cream and Cool Whip.

A Timing Note:  The noodles may be made, dried for an hour and cooked.  Or, they may be made a day ahead and dried overnight.  They should be cooked just before serving. 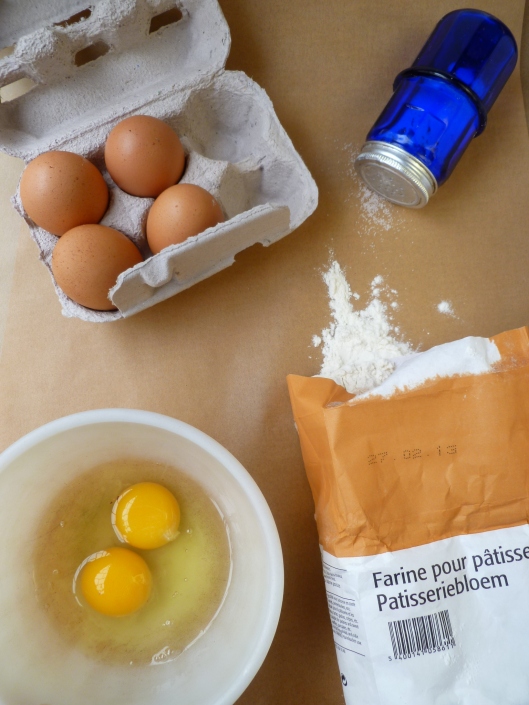 1.  To make the dough by hand.  Mix the flour and salt together in the bowl.  Make a well in the center of the flour and pour in the eggs.  Mix the eggs and flour together with your hands.  Press and squeeze the mixture to combine it and when it is still ‘scrappy’ turn it out on the pastry board to knead.  Use your fists on the mixture, pressing down on it and kneading it vigorously.  Forming the dough will take time, but eventually the flour and eggs will form a smooth, dry ball.

2.  A finished ball of dough is neither crumbly nor sticky: 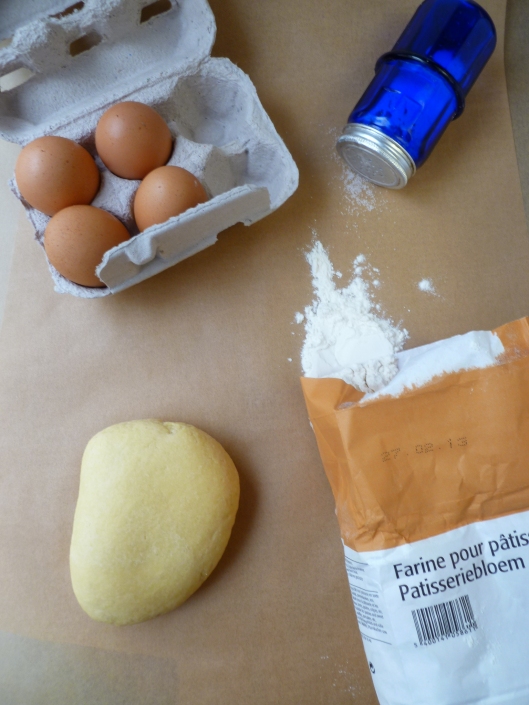 Let the dough rest, wrapped in waxed paper or covered with a linen towel, for about 20 minutes so that it will more easily roll out:

3.  Cut the dough in half and roll out half of it on a lightly floured pastry board.  (Have extra flour on hand in case the dough begins to stick–but it is unlikely to do so.)  Roll the dough as thinly as possible–(between 1/8 and 1/16-inch thickness is about right)–into a rough rectangle measuring about 9-inches by 10-inches.  Roll the dough from the middle, outwards, so that the edges of the rectangle do not become significantly thinner than its center.  The dough may have a tendency to shrink back as it is rolled out.  Flip it now and then as you form it. 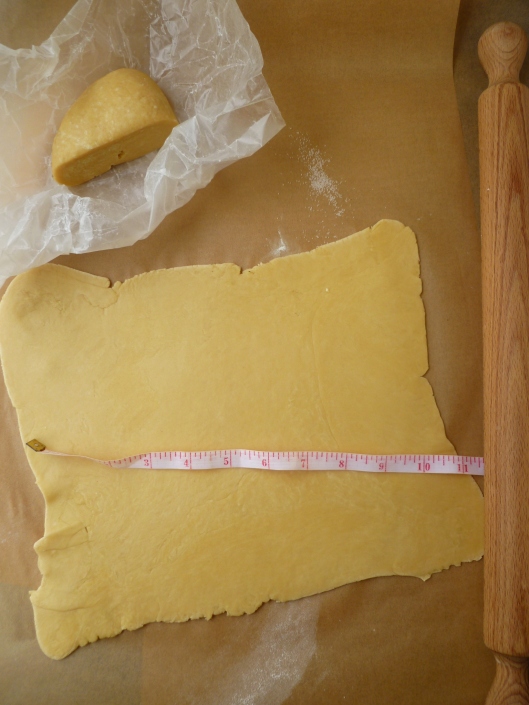 4.  Place a ruler or measuring tape at the edge of the rectangle of dough to serve as a guide as you cut it into noodles (1/4-inch in width) with a pizza cutter or knife:

5.  Once the rectangle has been cut into long noodles… 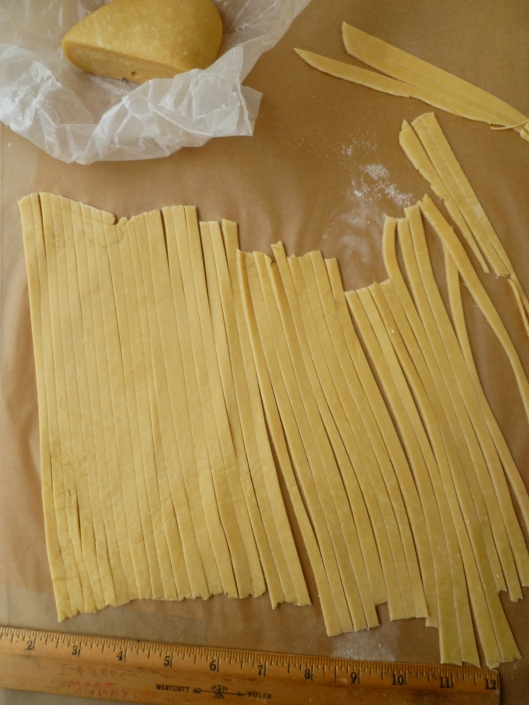 …cut the noodles in half crosswise: 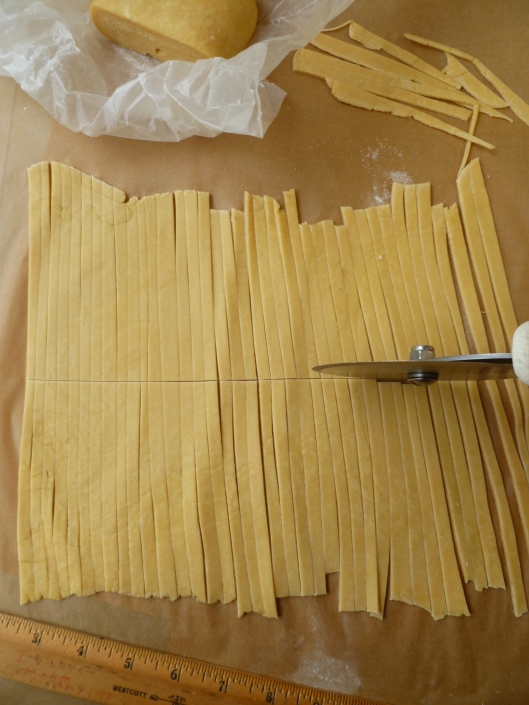 6.  Transfer the noodles to rimmed baking sheets lined with parchment paper. Arrange them in a single layer.  Roll out and cut the second half of the noodle dough in the same way…

7.  Cover the trays of noodles lightly with cheesecloth or linen towels.  Dry them at room temperature (preferably a cool, dry-ish one) for at least an hour, or overnight:

8.  Cook the noodles just before serving them.  Melt 1/4 cup of butter in a small, heavy saucepan that will keep it warm as you make the noodles.  (If you are also using the oven, you might set the saucepan of melted butter on the back of the stove to keep it warm.)

9.  Bring a large pot of water to a boil and add 1 Tablespoon of salt.  Add the noodles and boil them for 15 minutes.  They will puff a little and will lose all superficial resemblance to Italian pasta.  When done they are very slightly chewy.

10.  Drain the noodles well in a colander.  Transfer them to a bowl or casserole and mix them with the melted butter and the chopped parsley and sprinkle them with a little sweet paprika.  Leave them in the bowl for serving or divide them among plates.

A Last Touch:  Branches of Parsley and Fresh Red Chilis 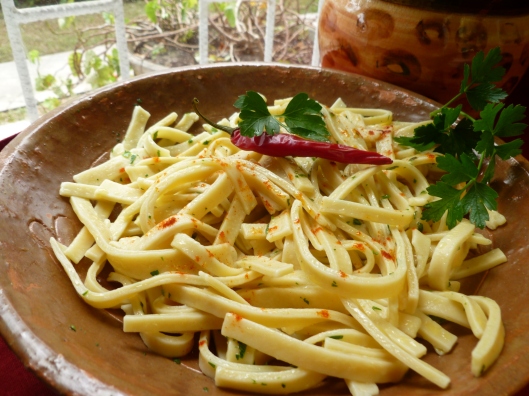 If the noodles are being served plain, at the side of a main course, a branch of fresh parsley and a fresh red chili arranged on them in the serving bowl or on individual plates will look pretty.

A Second Note:  Mr. Crouch writes on cultural topics from a Christian perspective.  “Eating the Supper of the Lamb in a Cool Whip Society” is available to read here on the website Culture Making. The website, however, is not primarily a venue for Mr. Crouch’s articles.  He describes the site as a “tumblelog”  and says, “While we post original material from time to time, what we mostly do is point our visitors toward surprising, hopeful, and challenging glimpses of culture making in action. We do our best to avoid the sacred–secular dichotomy that has dogged so much Christian thinking about culture. If it’s enlightening and provocative, we’ll post it, whether it’s “Christian” or not.”