Cole Porter is not alone in his flare for boldly rhyming where no man has rhymed before.  The author of these verses extolling the pig is a well-known adept in the art, too:

Any Part of Piggy

Any part of the piggy
Is quite alright with me.
Ham from Westphalia, ham from Parma
Ham as lean as the Dalai Lama
Ham from Virginia, ham from York,
Trotters, sausages, hot roast pork.
Crackling crisp for my teeth to grind on
Bacon with or without the rind on
Though humanitarian
I’m not a vegetarian.
I’m neither a crank nor prude nor prig
And though it may sound infra dig
Any part of the darling pig
Is perfectly fine by me.

Appreciations of the pig as pork often take humourous forms.  The thought of ‘pig-into-pork’  naturally makes people feel jolly because that is how good things tend to affect people when they think on them.

Here is a recipe which treats pork well.  The marinade, the glaze and the sauce all contribute their share to producing a roast that lends itself to celebration and merry making .  But, roasting times and temperatures are key, too.   As an elderly lady from Tennessee once remarked (and her views on the subject were reportedly held in high regard by those who knew her), “You don’t overcook or undercook, you jest cook it right.”

A suggestion for selecting the pork loin for this recipe:  To serve 4 people, a small tied pork loin, relatively long and small in circumference weighing about 1 and 1/4 pounds (or 580 -600 grams) is preferable to using a short, thick piece with a larger circumference cut from a bigger loin.  The small loin roasts more evenly.  Total roasting time for a tied loin of this size is about 70 minutes at the temperatures given in the recipe below.  For 8 people, roasting 2 small pork loins is only a matter of doubling the amount of the recipe for the glaze.  A single recipe of the marinade will be enough for two loins.

A Timing Note:  Allow time for the marinade to cool before placing the pork in it.  The marinating time is at least a day or up to two days in the refrigerator.  Total roasting time for a tied loin of this size is about 70 minutes at the temperatures given in the recipe below.

I.  Marinating the pork loin (for a small, tied pork loin weighing about 1 and 1/4 pounds or 580 – 600 grams):  See the note above on selecting a pork loin.  The amount of marinade does not need to be doubled for two loins. 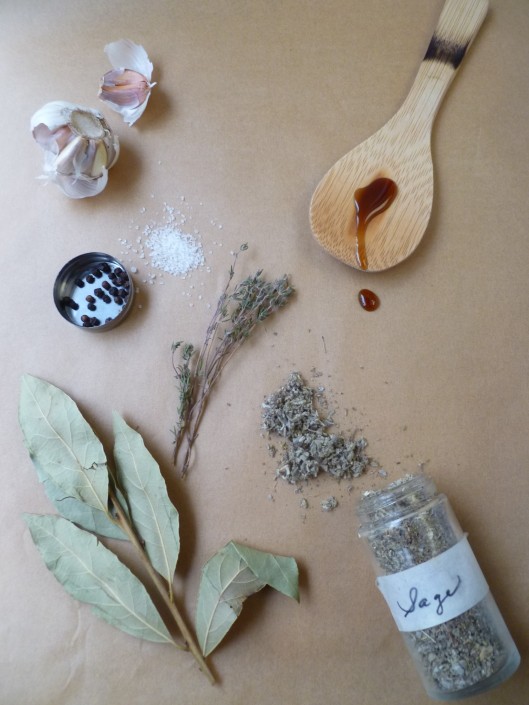 Ingredients for the marinade: 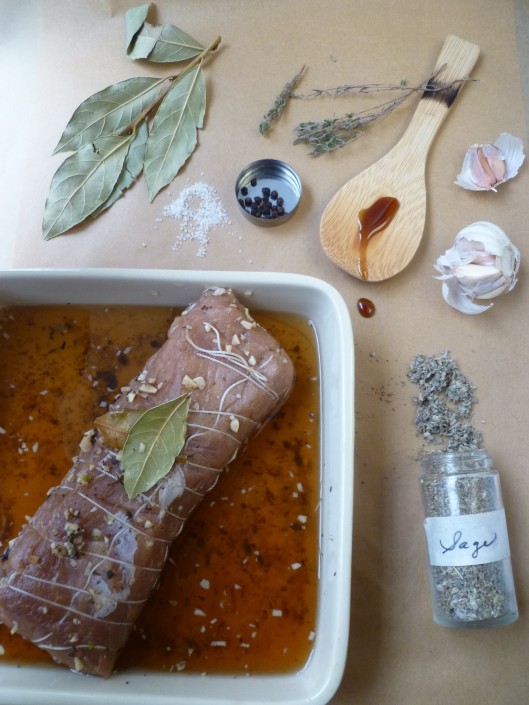 1.  To the saucepan add 2 cups of the water, the kosher salt, maple syrup, garlic, sage, thyme, bay leaves and peppercorns.  Heat the marinade ingredients over medium heat, stirring, until the salt dissolves.

2.  Remove the marinade from the heat.  Transfer it to a bowl and add 2 cups of cold water to it.  Refrigerate the marinade until it is cold.

3.  Transfer the marinade to a casserole or to a ziplock plastic bag, add the pork loin to it and marinate the loin for a day or up to two days in the refrigerator.  (The photographed loin marinated for 2 days.)

1.  In a bowl mix together the butter, maple syrup, mustard, thyme and sage.

2.  Remove the pork loin from the marinade and pat it dry.  Discard the marinade.  Brush half of the glaze all over the loin.

5.  Turn the loin again.  Brush it with glaze again and roast it for (perhaps) 40 more minutes at 350 F.  Individual ovens heat differently.  Check the internal temperature of the pork occasionally as it roasts.  When it reaches 165 F, remove it from the oven.  Brush some of the caramelized pan juices over the roast.  Transfer the pork, still sitting on the roasting rack, to a rimmed baking sheet, cover it loosely with a piece of foil and let it rest for 10 minutes before slicing it.  (Total roasting time for the photographed roast was 70 minutes.  The internal temperature of the pork roast measured 165 F when it was removed from the oven.  After a 10 minute rest before slicing, the internal temperature had risen to 170 F.  A roast cooked to this temperature is still juicy but not pink.)  While the pork loin is roasting, the sauce may be partially made.  (See Part IV below.)

6.  While the pork loin rests, finish making the sauce.

IV.  Making the Paprika and Mushroom Sauce (makes about 1 cup): 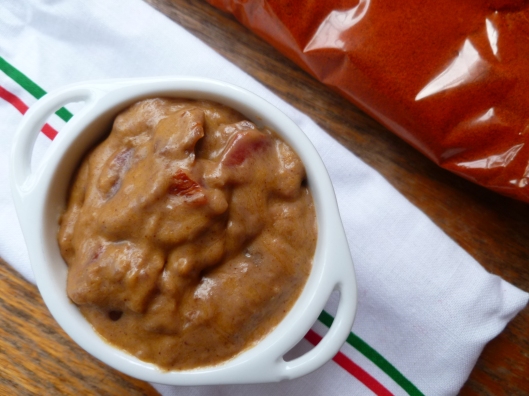 Timing Note: The sauce may be made several hours in advance through Step 4.  When the roast is done (and while it rests before slicing), continue at Step 5.  and finish the sauce. 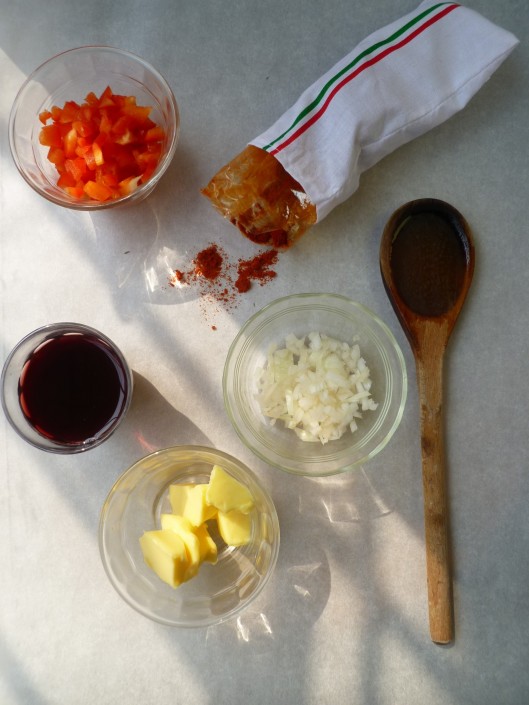 1.  Cut up 1 Tablespoon of butter into small pieces, place it on a saucer and set it in the freezer.

2.  Over medium heat, melt 1 Tablespoon of butter in the skillet.  Add the sliced mushrooms and sauté them.  Transfer them to a bowl or plate and set them aside.

4.  Add the wine and reduce it over medium heat until the pieces of onion and pepper are sitting in the wine, not covered by it and there is a rim of reduced wine left from its evaporation all around the rim of the pan.  The wine will be sizzling all over the surface of the pan when it has sufficiently reduced.  Add the paprika, and stir the reduction around for a few seconds to blend it in: 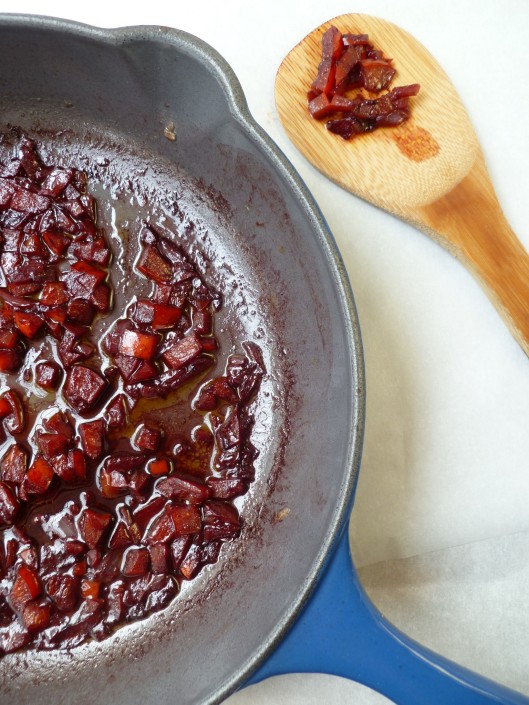 …The sauce may be made up to this point in advance and set aside until the roast is done and it is time to finish the sauce. 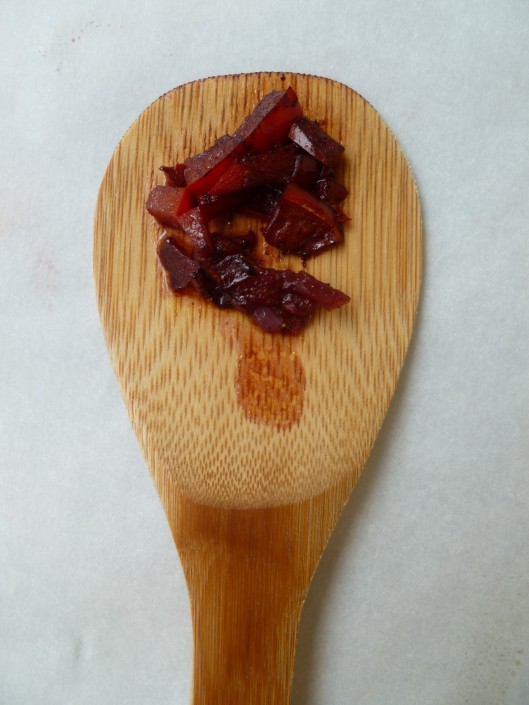 5.  To finish the sauce just before serving the pork, take the Tablespoon of butter cut in pieces from the freezer and place it nearby the burner where you’re making the sauce.  Return the skillet containing the onion and wine reduction to the burner, and heat it over medium heat.

6.  Add the cream and the demi-glace and the sautéed mushrooms. Cook them all together–still over medium heat–until the sauce reduces a little, bubbles all over its surface and looks thickened.

7.  Take the skillet off the burner and whisk in the frozen butter, one piece at a time, incorporating each piece before adding another.

Optional for decorating the plates:

1.  Slice the loin…a small one of this size (weighing only a little over a pound) will slice into 12 pieces.  In a multi-course meal, 3 slices per person is a good amount.

2.  A suggestion:  If the roast is served with Homemade Egg Noodles, arrange some noodles in the middle of each plate, and arrange slices of the roast on top of them.  Spoon some sauce over the pork and sprinkle each plate with some parsley: 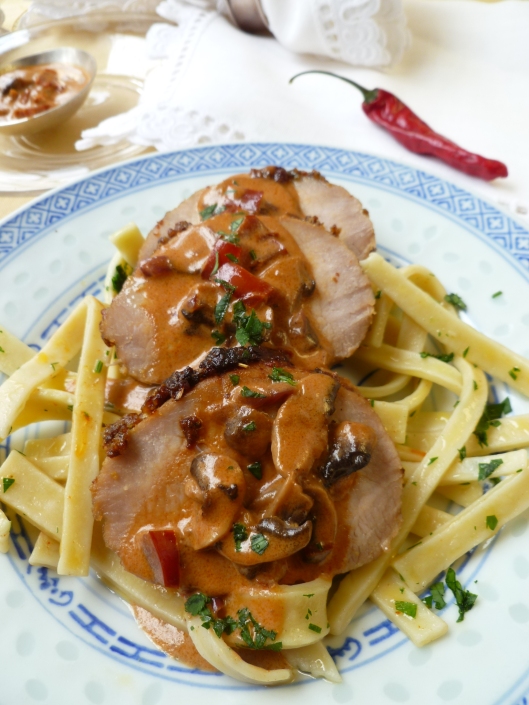 … In the previous dk recipe for Homemade Egg Noodles,  a fresh red chili was the ‘Last Touch’.  Whether or not the egg noodles are part of the package, the chili will look nice with the pork, too. 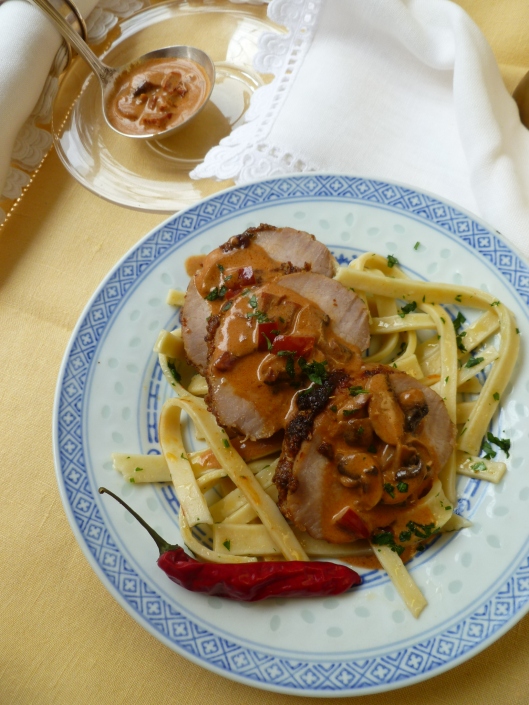 A Note:  In the Dinner Menu ‘Magyar Accents ~ a Dinner for Four’, Maple and Mustard Glazed Roast Loin of Pork with Paprika and Mushroom Sauce is the Main Course.