The Story of the Three Chefs ~ A Fractured Culinary Fairy Tale

Once upon a time, there were three brothers who lived together in a small cottage in the country not too far from the inn where they all worked as chefs.  One day, the brothers went into their kitchen and made, each according to his own lights, a pot of carrot soup.  (And, since we are fracturing a tale from the Brothers Grimm, let it be three pots of Karottencremesuppe.)

Reasoning that the flavour of their soups, as well as their appetites would only improve if allowed to develop, they placed their respective soup pots on the window ledge and set out for a short stroll through the meadow.  (Please, gentle reader, suspend disbelief in the matter of the first brother’s leaving his soup–into which he had just whisked egg yolks and cream–with the intention of coming back to reheat it later.)

A hungry tramp, passing by the cottage, sniffed the air appreciatively and, following the good fragrance to its source, found himself standing before three unguarded pots of delicious looking soup.  He first tasted of the oldest brother’s soup.  It was a fine creamy blend of vegetables and herbs, thickened with egg yolks and cream in the way often prescribed for making a traditional velouté soup.  Had there not been two more pots inviting his attention, the tramp would have been perfectly satisfied to gobble up the first.  However, there were two other versions inviting his inspection…He tasted of the second pot.

This one, he considered distinctly inferior to the first, for the second brother had used a rice purée to bind the soup’s flavours together.  “Not bad,” the tramp said to himself, “Maybe ever so slightly grainy in texture and perhaps a little…unstable.”

Finally, he turned to the youngest brother’s pot of soup, which he had made using potato, rather than egg or rice, as a thickener, and then enriched with a little cream.  Somehow, this version managed to achieve the rich smooth consistency of the first brother’s soup and to preserve the fresh tasting quality of the vegetables that the second brother had tried to manage with his use of rice.  “This is the goods!” he said aloud, and…he ate it all up.

Judging the relative merits of different ways of making a velouté is a wholly subjective business.  But there is general agreement that a good vegetable velouté ought to be a smooth, thick, savoury and harmonious blend of ingredients.  The one featured here is all of these things and the use of potato rather than egg yolk as a thickener has the advantage that the soup may be made in advance and reheated.  The addition of a Madras curry blend warms the soup’s flavours without turning it into a ‘hot spicy’ dish.  And, while an egg and cream version of a vegetable velouté is very fine, this one is a shade more about the vegetables and still manages to retain the rich quality that a velouté should have.

Note:  To print this recipe, or any other diplomatickitchen recipe, go to the bottom of the page, at the end of the post, and click on the icon: Print & PDF. You will have the option of printing in smaller text size and without photos

Timing Note:  The soup may be made 1 or 2 days in advance, cooled, and refrigerated.  It reheats well.  A little additional cream or bouillon may be required to thin it a bit to suit your taste when reheating.

Ingredients:  Amounts are given in metric measures and, in parentheses, the closest American equivalents.

1.  Peel and trim the carrots, cut them into thick rounds and set them aside.

2.  Peel the onion and garlic cloves, mince them both and set them aside.

3.  Peel the potatoes and cut them into large-ish cubes.

4.  Over medium heat, melt the butter in the pot.  Add the carrots, onion and garlic and cook them, stirring them all about, for about 5 minutes, or until the onion is softened but has not begun to color.

5.  Add the potatoes and the bouillon cube dissolved in water.  Adjust the heat so that the soup simmers, partially cover it and cook it for 30 minutes, or until the potatoes and carrots are quite done and tender.

6.  Run the soup through a food mill placed over a mixing bowl or pot, using a disc with medium holes.  Or..purée the soup in small batches in a blender or food processor, transferring each batch to a bowl or pot as it is done.

7.  Return the soup to the original pot or casserole if it is now in a bowl.  Heat the soup over low heat and add the curry and heavy cream.  Taste and season the soup with freshly ground black pepper and salt.

8.  Serving the soup:  Divide the soup among bowls.  A small branch of flat-leaf parsley for each bowl makes a pretty garnish.  To serve the soup later, cool completely, cover and refrigerate it.  Reheat it slowly over low heat and add a little additional cream or bouillion if it is thicker than you like. 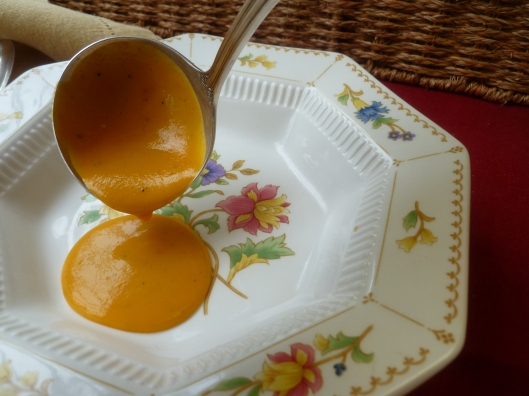 A Note:  Velouté de carottes au curry is the First Course of the Occasional Menu: An After Theater Supper.  It is adapted from a recipe in the French cooking journal Guide Cuisine. 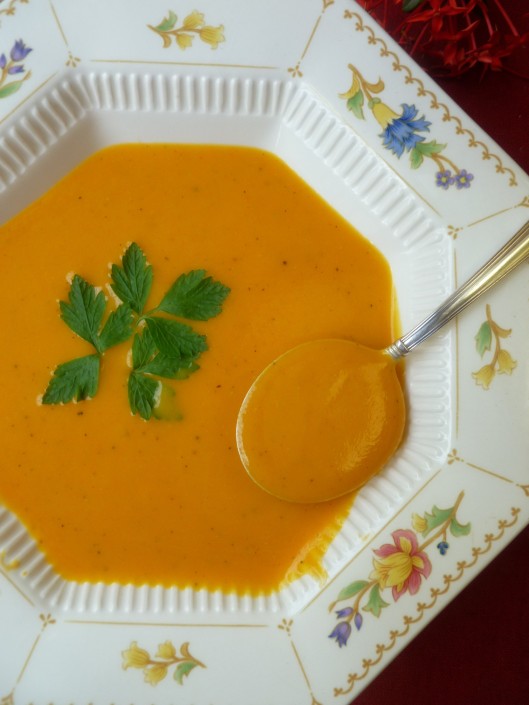