On a counter, leaning upright against a wall in the diplomatickitchen, is an aged tray, used daily for serving morning and afternoon coffee.  Moulded in hard plastic, it is not an object of great beauty or fine craftsmanship.  Its attraction is the picture imprinted on its surface– a winter scene depicting, primarily in shades of blue and gray, a water mill standing alongside an icy stream.  A wooden bridge spans the water before the mill and a small figure drives his horse-drawn sleigh, laden with sacks of new-milled flour, across it.  Hitched to a sledge before the mill’s open doorway are a couple of oxen. A single sack rests on the sledge and the two animals stand, with lifted heads, in the deep snow, as though listening–expectantly– for the word from their master that will send them homeward bound.

Time in the little scene is as frozen as the landscape it represents.  Only imagination sends the oxen off, quicker than they came, to their stall and a good feed.  The man in the sled is perpetually heading home.  Only in the mind’s eye does a woman scan the familiar scene from out the kitchen window, on the lookout for the appearance of that horse-drawn sleigh, until…at last… she spies it, barely visible by the thin, cold light of the sunless afternoon, coming up over the horizon, hurrying toward her across the snow-blanketed fields.

It is human nature to enjoy an illusion of permanence.  This tray, this commonplace kitchen object, offers up daily a glimpse into a restful, illusory world, and for this reason  it stands upon the counter, day after day, year after year, never by choice to be replaced with something finer…reflecting an imaginary place that never fades, changes, or produces the unexpected.  On its plain, hard surface is a dream of timelessness, a dream that is especially enjoyable because we know it is only a dream.

Almost a half-century ago, Jane Grigson, a writer well known for her books about food (especially English food), published a little piece about walnuts.  Mrs. Grigson was fond of historical anecdote and offered one to her readers that evoked, via the humble walnut, the illusory mood of permanence. Her words about the ordinary brown nut create a charming little picture of time standing still:  “The kiln-dried Sorrento walnuts, ” she wrote, [are] “from the same place as the ones that were found under the dust of Pompeii, lying in their bowl beside eggs and cereal, still waiting for the priests of Isis.”

Mrs. Grigson provides a number of good ways to cook the nut, too, and this is one of them: Walnut Bread from Southern Burgundy. 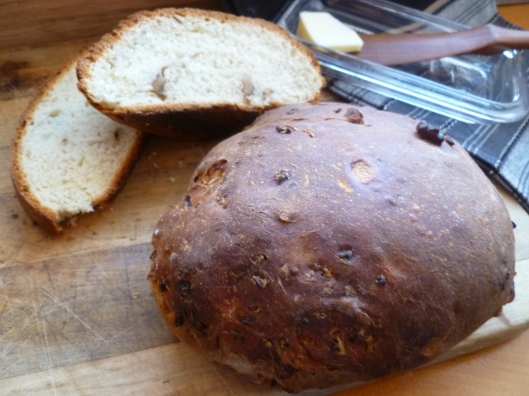 Jane Grigson’s Walnut Bread From Southern Burgundy (for 4 small round loaves, each about 7-inches in diameter) 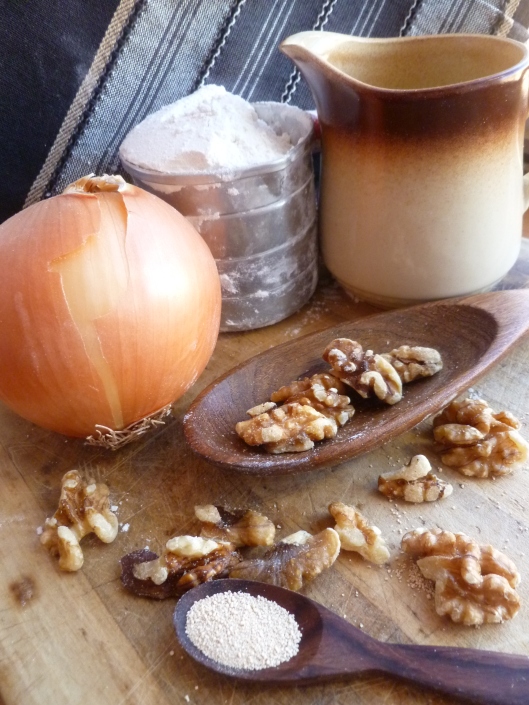 2.  Into the mixing bowl sift the flour, sugar and salt.  Make a well in the center of the flour and pour in the yeast mixture, the remaining 1 and 1/2 cups of warm milk, and the melted and cooled butter.

3.  Stir the mixture until everything begins to combine and form a dough.  Then knead the dough by hand in the bowl.  Alternatively, the dough may be kneaded on a pastry board or in an electric mixer using a paddle attachment.  The dough is ready when it leaves the sides of the bowl…

and forms a smooth ball: 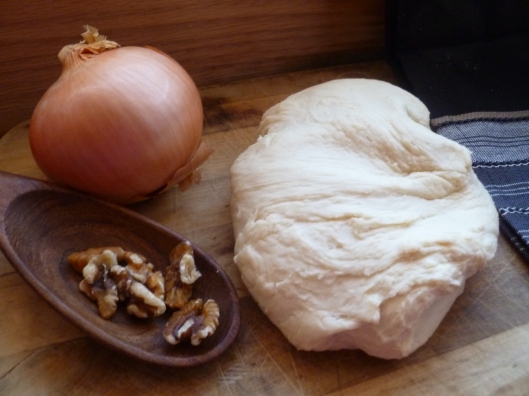 4.  Let the dough rise, covered, in a clean, dry bowl for about 2 hours–preferably in a warm place.  It should just about double its original size.

6.  Punch the dough down.  Add the chopped onion and walnuts to the bowl of dough and knead them in by hand.

7.  Sprinkle the pastry board with a little flour.  (The onions will make the dough a bit sticky.)  Turn the dough out onto the board.  Divide the dough into 4 equal pieces and shape each piece into a round loaf.

…and let them rise for 45 minutes:

9.  Bake them at 400 F. for 45 minutes.  Cool the loaves on wire racks.  (The crust will soften as the bread cools.)  Wrapped in aluminum foil and stored in plastic bags, the bread will stay moist and fresh for several days.

A Note:  Jane Grigson’s Walnut Bread from Southern Burgundy is used to make the croutons for the Salad of Romaine, Apples and Cucumber with Toasted Walnut Vinaigrette in the Dinner Menu:  New Year’s Celebration for the Romantic, the Introvert, the Homebody ~ a Dinner for 2, 4, or 6.  The recipe is adapted from one in Mrs. Grigson’s article “Walnuts” which appeared in the October 1971 issue of Gourmet.

A Recommendation:  The spreader and large hand-carved spoon in the photos are by Mr. Robert Kidd, whose beautiful kitchen utensils may be ordered here from Mr. Kidd’s shop at etsy.com.