‘The Muscat grape has been grown for a long time in Beaumes and its wine is remarkable.’ (Pliny the Elder, 23 AD – 79 AD)

Different foods inspire different moods. The prevailing emotional tone of some foods is ‘comfort’ and there are times when one feels that nothing else will do but a dish that falls under this heading.  At the other end of the edibles spectrum are dishes that suit occasions that are meant to be out-of-the-ordinary, distinctive from the everyday, a grand gesture–not of pretense, but of romance.

Rock Lobster Tails with Sauce Muscat Beaumes de Venise falls into this latter category.  It is an extravagant offering.  (Rock lobster tails do not come cheap in many parts of the world.)  And it includes a wine with a history that goes back to the beginning of the first millenium, which seems suitable for a dish that is included in a dinner menu for New Year’s Eve–an evening when one’s thoughts wander down the paths of Time, past and present.

Finally, it is a dish that is beautiful and downright romantic in spirit.  Romance is welcome on occasions when we come together around the table with a person (or persons) we love.  It is an element of life to hold on to firmly, for, as was once rightly remarked:

I.  Rock Lobster Tails (Queues de langoustines) with Sauce Muscat Beaumes de Venise (for 2, 4 or 6 people:  See the Note on Adjusting Quantities below.)

A Note About Adjusting Quantitites:  The recipe is included in the diplomatickitchen’s New Year’s Celebration Menu, which is designed to adapt for 2, 4, or 6 people.  The suggested serving is 2 rock lobster tails per person.  Only the number of lobster tails varies with the number of servings.   The amount of sauce does not require adjustment; make the same quantity for any number.  It is a sauce of distinctive flavour and isn’t meant to be added to the lobster in large amounts.

A Timing Note:  The lobster tails may be cooked several hours in advance.  They are heated in cream just before serving.  The sauce may also be made in advance and reheated.

Ingredients:  A reiteration..To adjust ingredients for different numbers of servings, increase or decrease only the number of lobster tails.

1.  Fill a pot with salted water and bring it to a boil.  Add the lobster tails and cook them for 3 minutes.  Drain and cool them.  Shell them and remove the tail meat in one piece.  Set the tails aside.  Refrigerate them if preparing this part of the recipe several hours in advance.

2.  Just before serving, cut each lobster tail crosswise into small medallions (about 4 from each tail).  Set out individual serving plates nearby on which to arrange the first course.

3.  Melt the 2 Tablespoons of butter in the pan.  Add the cream and  salt and bring the mixture just to a simmer.  Add the medallions of lobster and heat them through.

4.  Once heated, transfer the medaillions with a slotted spoon directly to the plates, dividing them equally.   Dribble a small amount of Sauce Muscat Beaumes de Venise over each plate of lobster.  (The sauce is delicious, distinctive and is used with restraint.  It is the sort of combination of flavours that surprises–in a good way–and there should be just enough of it to make a body wish there were a little more when it is all gone.)

5.  A Serving Suggestion:  Decorate each plate with a few leaves of fresh coriander (cilantro) and a slice of lime which some may want to use to strengthen the lime flavour in the sauce.

An Ingredient Note:  Muscat Beaumes de Venise is a sweet fortified wine.  If it is the real thing, The ‘AOC’ designation (appellation d’origine contrôlé) will appear on the label.  A detailed description of the wine is here on Wikipedia.

A Timing Note:  The sauce may be made several hours in advance and reheated over low heat just before serving. 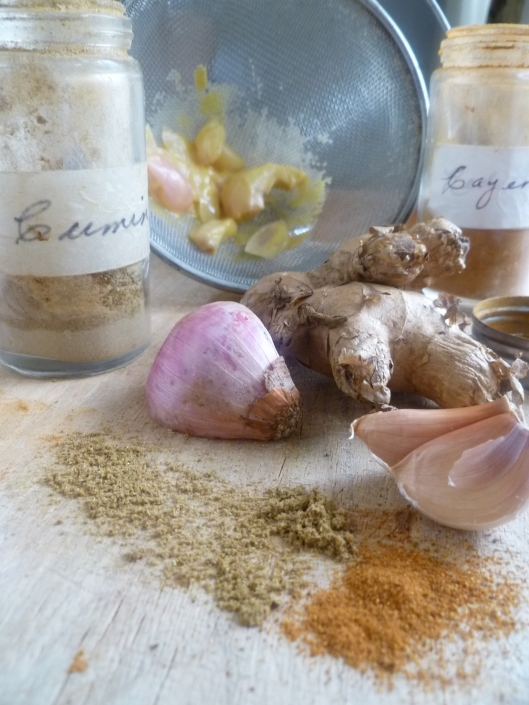 1.  Combine the wine and cream in the pot. Whisk in the ground cumin and a pinch of cayenne.  Add the ginger, shallots and garlic.

2.  Bring the sauce to a slow boil over medium heat.  Turn the heat down to a little below medium heat so that the sauce simmers steadily.  Simmer the sauce until it has reduced and thickened to the point where big bubbles form all over the surface.  Judge when the sauce is ready by the look of it rather than the quantity of the reduction.  It will be smooth and just thick enough to coat a spoon.

3.  Strain the sauce into a bowl.  Return it to the pot and stir in the juice of half a lime.  Salt the sauce to suit your taste and add a bit more cayenne if you like.

3.  If the sauce is made in advance, reheat it gently over a low fire so that it does not reduce and thicken further.

A Note:  The First Course of the diplomatickitchen Dinner Menu, ‘New Year’s Celebration for the Romantic, the Introvert, the Homebody ~ a Dinner for 2, 4, or 6‘ is Rock Lobster Tails with Sauce Muscat Beaumes de Venise.  The recipe is adapted from one in a New York Times article by Marian Burros:  “Baby Cilantro Comes of Age” (May 26, 1999). 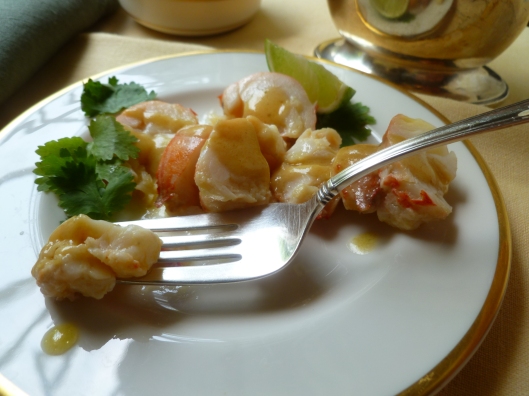