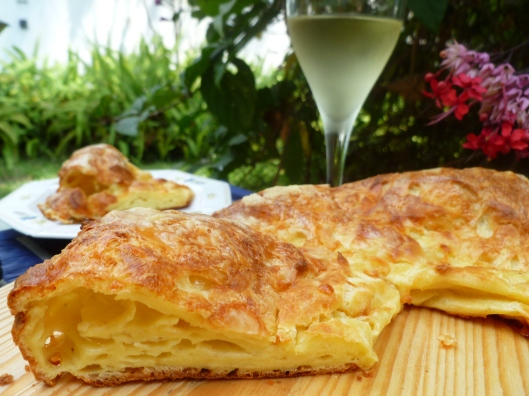 In the preface to the recipe for Gougère in her highly readable French Provincial Cooking, Elizabeth David warns that making a Gougère is “rather tricky” and counsels perseverance.  What she means by “tricky” is that sometimes a Gougère rises and bakes to just the right degree of crispness and golden color and–when removed from the oven–stays that way.  Sometimes, however, after blooming into a great golden ring in the oven, it subsequently…deflates.

If an oven heats too energetically, the Gougère, left for the full baking time, will darken a little too well before it is fully crisp.  If this befalls your Gougère , it is better taken out of the oven a little early–even though it will flatten a bit–before its crust has definitely turned from a yellow-gold to brown and the bottom develops a burnt taste.

Fear of a flat Gougère should deter no one from this baking venture which is both fun in the doing and a pleasure to eat…nobody focuses on the imperfections of something that tastes so good.

Results that are less than perfect, taken in the right spirit , are a salutary–even an indispensable–part of learning.  Here is what another well-known cook of the 20th century felt about her own mistakes in the kitchen:  “Of course, I made many boo-boos,” said Julia Child. “At first this broke my heart, but then I came to understand that learning how to fix one’s mistakes, or live with them, was an important part of becoming a cook.” 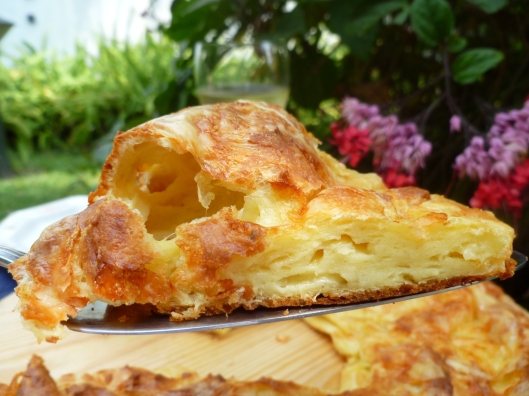 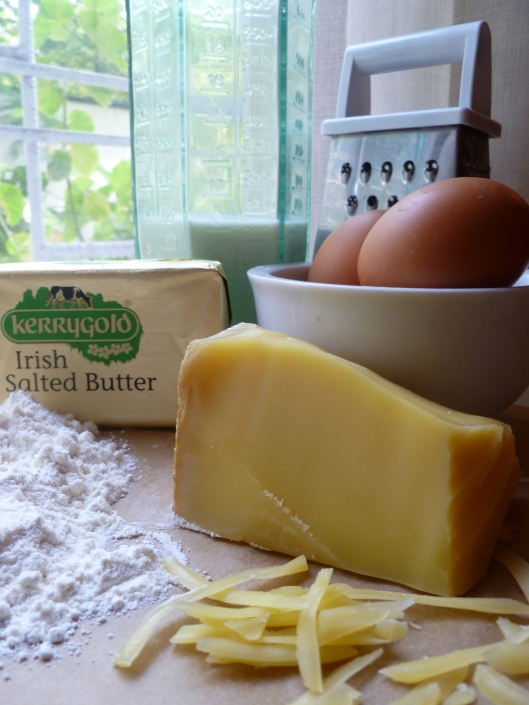 1.  Preheat the oven to 375 F.  Streak the baking sheet with butter to hold down the sheet of parchment and lay the parchment paper on it.  Using a couple of bowls as guides, trace a 7-inch ring on the paper, and in the middle of that ring, another ring, 2 and 1/2-inches in diameter.  (The circles are general, not precise, guides for forming the Gougère.): 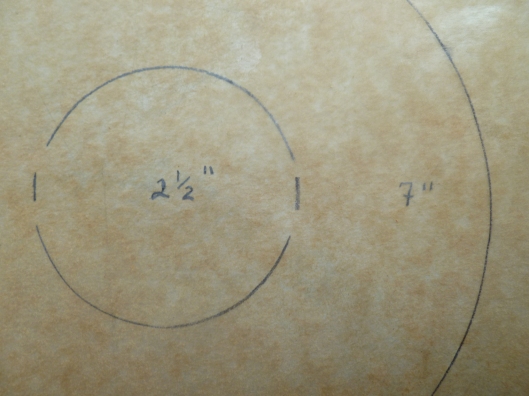 2.  Place the milk, bits of butter, and salt in the pot, along with a few grinds of pepper.  Bring the mixture quickly to a boil…

…and pour in, all at once, the sifted flour.  Stir the mixture vigorously over medium heat until it comes away from the sides of the pot and forms a ball: 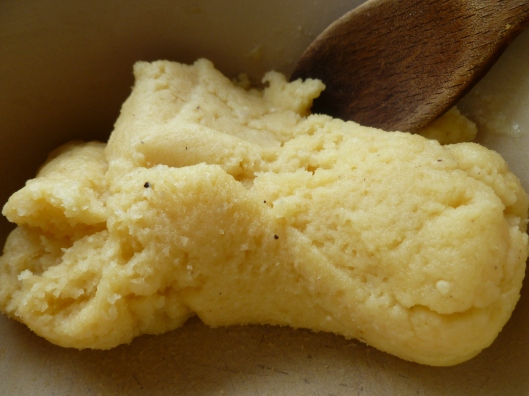 3.  Remove the pot from the heat and add the first egg:

Stir it in completely before adding the next one: 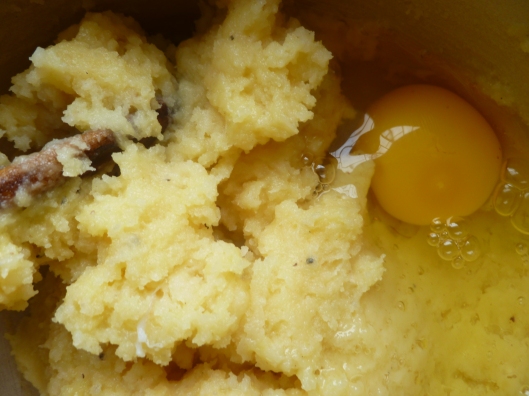 After each addition of an egg, mix it well into the puff paste before putting in the next…until all four eggs have been added:

4.  Stir in the grated cheese and the nutmeg:

5.  With the scoop or a spoon, and using the tracings on the paper as a guide,  place balls of the puff paste around the circumference of the 7-inch circle drawn on the parchment paper…

…then, put the remaining paste by spoonfuls on top of the first ring of balls.  There probably won’t be as much paste for the second layer–place the balls at fairly regular intervals on top of the bottom tier:

6.  Run a spatula or knife along the sides and across the tops of the balls of paste and smooth them together to form a ring:

7.  Sprinkle the small cubes of cheese over the ring: 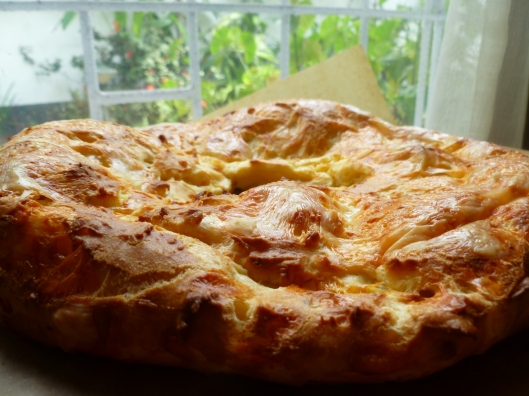 ….and slide it onto a cooling rack: 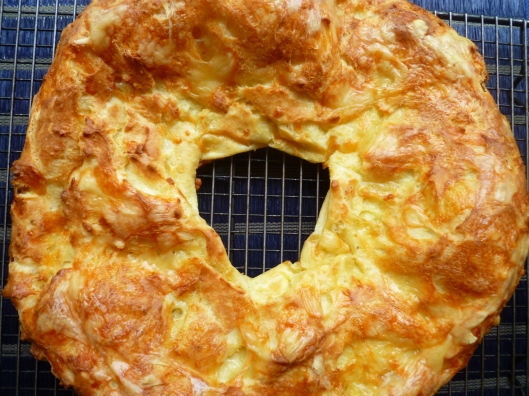 9.  Cut the Gougère in slices.  It is good both hot and at room temperature:

A Note:  This recipe for Gougère is adapted from the one in Elizabeth David’s French Provincial Cooking.  Julia Child’s remarks come from her entertaining autobiography My Life in France.

A Second Note:  Gougère   is served with aperitifs before lunch in the diplomatickitchen Menu: Lunch from the Grill in the Congo.  Little aperitif sausages go well with Gougère.